As it is Sunday and I seem to be coming down with a bug, I think it is appropriate to become metaphysical for a moment.

The trinity (or the power of 3) seems to be a firm rule in baking as well as western religion.  However rather than being God, the Father and Son, learning something new in baking seems to go Messed Up, Messed Up a Little Less, Getting There. The Trinity Law of Baking struck again this week.

I had been planning this little number courtesy of Eric Lanlard as it involved 4 things I have not done before or not done for a very long time – puff pastry, choux pastry, creme patissiere, caramel as well as wielding a piping bag (something that always leaves me quivering with fear).

So what is this? It is a take on Gateau St Honore.  Staying metaphysical for a while, St Honore is the patron saint of Patisserie so no pressure making a cake devoted to him then.  It is normally cake sized, with a layer of puff pastry, creme pat filled choux buns stuck to the edge and topped with caramel and then the cake is filled with creme pat and chantilly cream (a fancy word for the heart destroying combination of double cream and sugar). There is this  french video where the blogger waxes lyrical about how “tres simple” the whole thing is.  No comment from this side of the channel Monsieur, especially as you use shop bought pastry! 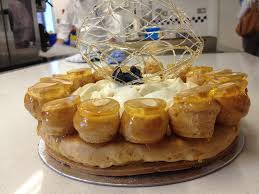 The Eric Lanlard version looked a little less challenging.  It is individual portion sized, the choux buns are just piped round the edge of the pastry disc, and then it is filled with creme pat mixed with whipped cream and cointreau, topped with strawberries, and finished off with a bit of spun sugar.  We were going for dinner with our friends Monica and Jonathan so I thought I would give it a whirl ….hmmmmmmm.

Lets start with the puff pastry.  I have done croissants before and the technique 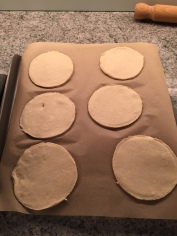 of slapping an entire pack of butter on top of dough and then rolling and folding numerous times is very similar.  If you want to see what it involves then watch this great video on BBC Goodfood. My main tip – don’t skimp on chilling or else you will get a buttery mess all over your work top, and don’t try to do too much in one go otherwise you end up overworking it and squishing out the layers that make puff pastry so distinctive.  It took me (yes you have guessed) 3 goes to get it right.  Oh yes – I forgot to mention that you have to start the the day before you are ready to use it.  Jusrol All Butter Puff is there for a very good reason!

My last tip with puff pastry is that once you have rolled and shaped it, put them back in the fridge for 30 minutes.  If they are too warm going into the oven, the butter comes out too quickly and it doesn’t rise.  And finally have a proper cutter if you want them to be neat. I have mislaid mine so tried hand cutting the discs so they ended up a little wonky.

So onto to the Creme Pat.  For some reason I have always struggled with this and have dodged recipes with 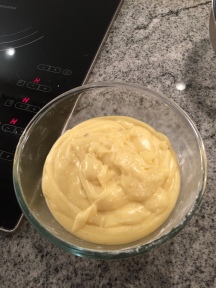 it as a consequence.  There are basically 2 techniques – one using flour and one using cornflour.  Being a bread maker I went for flour.  DON’T! What you basically get is a grainy claggy mess.  Also try to use proper vanilla, not extract.  No matter how expensive the extract, it always seems to have an artificial edge in creme pat.  It is fine for cakes where there are so many other things going on, but not when this is the main event.  There are lots of recipes on the net so try any of them as long as they don’t include flour.  The Creme Pat was cracked after only 2 goes (hurrah!) – a minor miracle -though I may add a little more cornflour next time for a firmer set.  The good news is you can make it days in advance as long as you put clingfilm on the surface to prevent a skin – it doesn’t freeze though.

Creme Pat finally cracked I moved onto Choux.  I have done it a few times a long time ago but frankly had forgotten how it all worked.  The Rule of 3 firmly struck with this one.  My first attempt used plain flour and milk.  My thought was try eclairs first before tackling the gateaux.  The consistency was fine and the piping as ever was a little wobbly.  What came out was definitely not fine – a series of flat choux fingers with not a rise in sight!  (sorry no pictures- it was before work and I was in a rush).

So off to the internet I go and delving into the cook books at home.  Here are a few quick tips on Choux

Get all this right you should be fine.  I confidently thought I had the right consistency until I tried piping the little buns around the puff pastry discs.  They should have been standing tall with elegant little tails as you lifted the piping bag off.  Mine sagged like my middle aged midriff.  The upshot of this is that while they puffed nicely, they were too flat and not able to accommodate the filling to the extent they should.  I haven’t done the third time yet for the perfect finish but I plan to. 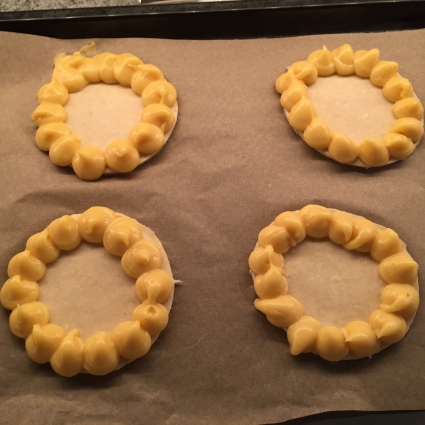 The last stage was easy.

The sharp eyed amongst you may have noticed no spun sugar on the confections in the picture. Why I hear you cry!

Well you might have surmised that there was a lot of work in producing so few dainties and you would be right.  It is a 3 hour job end to end all condensed to 5 minutes on Erics Youtube video. I basically ran out of time.  Having started at 3pm (plus the day before for the puff pastry), once we got to 5.30 I needed to head for the shower to get to our friends for whom this was being made.

Were they worth it?  For the learning experience yes, but for the taste they were just OK. They were much cooed over by Monica and Jonathan but on a time versus deliciousness matrix they probably won’t be done again soon.  I think the choux buns round the edge really need the classic treatment of being filled with creme pat to push the taste levels up. Admittedly because mine were so flat, there wasn’t enough creme pat/cream mixture in them so I might try a couple today to get the choux edge right and use up the left over puff and creme pat, plus do the caramel … or then again I may just head for my sickbed as the bug I am sickening from starts to get a grip.

So what is the next challenge