Some stories are best started at the end. One of the issues with baking every weekend is how to consume the produce. If I keep the pace up,  both the husband and I are set to be either very popular at work or get even more portly than we already are, not to mention all those middle aged  health issues like blood pressure and cholesterol.  However this weekend our friends Paul and Bernard are coming for Kaffee und Kuchen to sample this week’s challenge, which if you have read the blog already you will know is the Kardinalschnitte (or the Cardinal Slice in English).  So instead of Mathilde, Ottilie, Marie und Liliane from the Udo Juergens song, Aber mit Sahne, it was Trevor, Stephen, Paul and Bernard  sat in the Kondotorei (well actually our Conservatory), schwatzen and schmatzen (chatting and munching) through a couple of slices each over coffee, and because it is Valentines Day, a glass of pink champagne.

As you see in the picture, the Cardinal Slice that was created didn’t quite go to plan.  So runs the law of baking!  Everything was prepared for a three tier Kardinalschnitte with a plain cream one with a valentines day twist and a coffee one for interest.  What we ended with is this little beauty which as you can see is only 2 tiers and does not have a coffee flavouring in sight.

What went wrong with the plan? Well firstly I think I made the sponge and meringue slices a little small – read the method on that one.  Then I ran out of cream because I over whipped my first batch partly because I was tipping Himbeergeist (raspberry schnapps – yum) in the cream to get a different more adult flavour which meant I thought it  wasn’t stiff yet (there go the double entendres again) and I am not used to  whipping cream which does not go as firm as double cream.  Then I realised my adaptation of whole raspberries would have made the cake slices ridiculously  tall and at severe risk of heading south from the Tyrol to Pisa.  So the decision was to adapt a little, and the good news is I have 2 slice layers in the freezer for another day – hurrah!

So the final product is a 2 tier slice, with light pink cream and whole raspberries in honour of Valentine’s Day.  And what did our tasters think? Well the unananimous opinion was very good. Despite being rammed with whipped cream, this cake is light as a feather.  The meringue has a third of the sugar of normal meringue, and the sponge is nearly all egg yolk, and the addition of raspberries adds an acidic cut to the cream and sugar, that I think makes the cake.  If I was being hyper critical the meringue should have been piped wider as it almost disappeared into the sponge.  However I am rather pleased with the result and this one will definitely feature again in my cannon of baking. 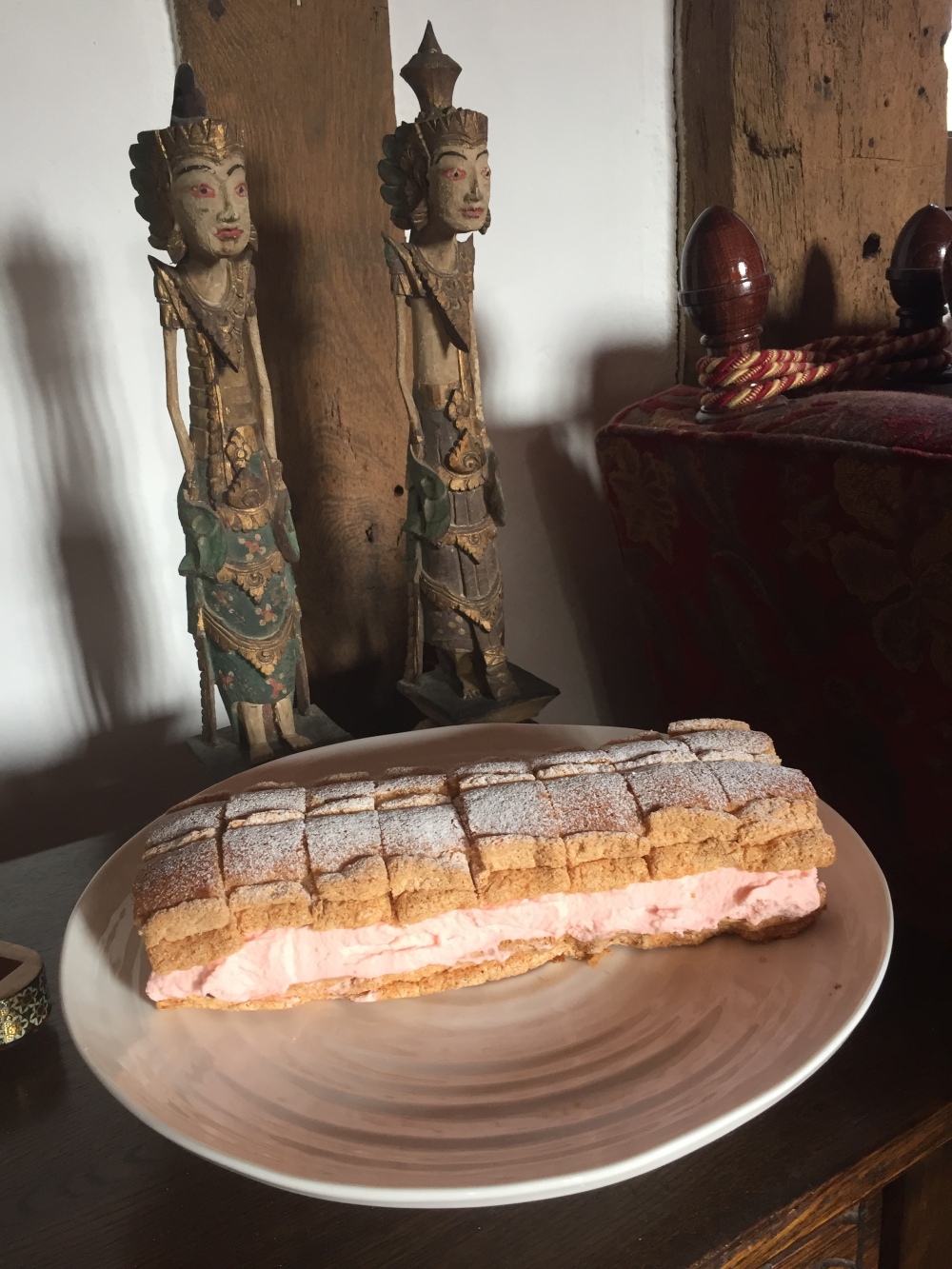 So how do you make this? It is not a straightforward cake, more because of all the processes than any particular technical baking requirements, so pay particular attention to the method. The key is preparation:

The Recipe (courtesy of Hanuma Kocht)

This recipe will make 2 medium sized 2 tier Schnitte’s, or one very wide 2 tier one, or one narrower 3 tier one.  For the cream filling you need to be a bit flexible on quantities.  I found I didn’t have enough, so would recommend you have available a bit more than the recipe. 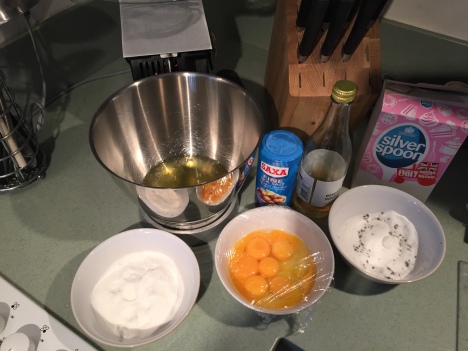 Cream Filling (for the fruity version I did)

You are piping the meringue and sponge mixture next to each other and the end product is stacked on top of each other so you need to get them the same size.  You also need to decide whether you are going for small or wide 2 tier, or medium sized 3 tier and this affects the way you set up your sheet.

To make the Sponge and Meringue Layers 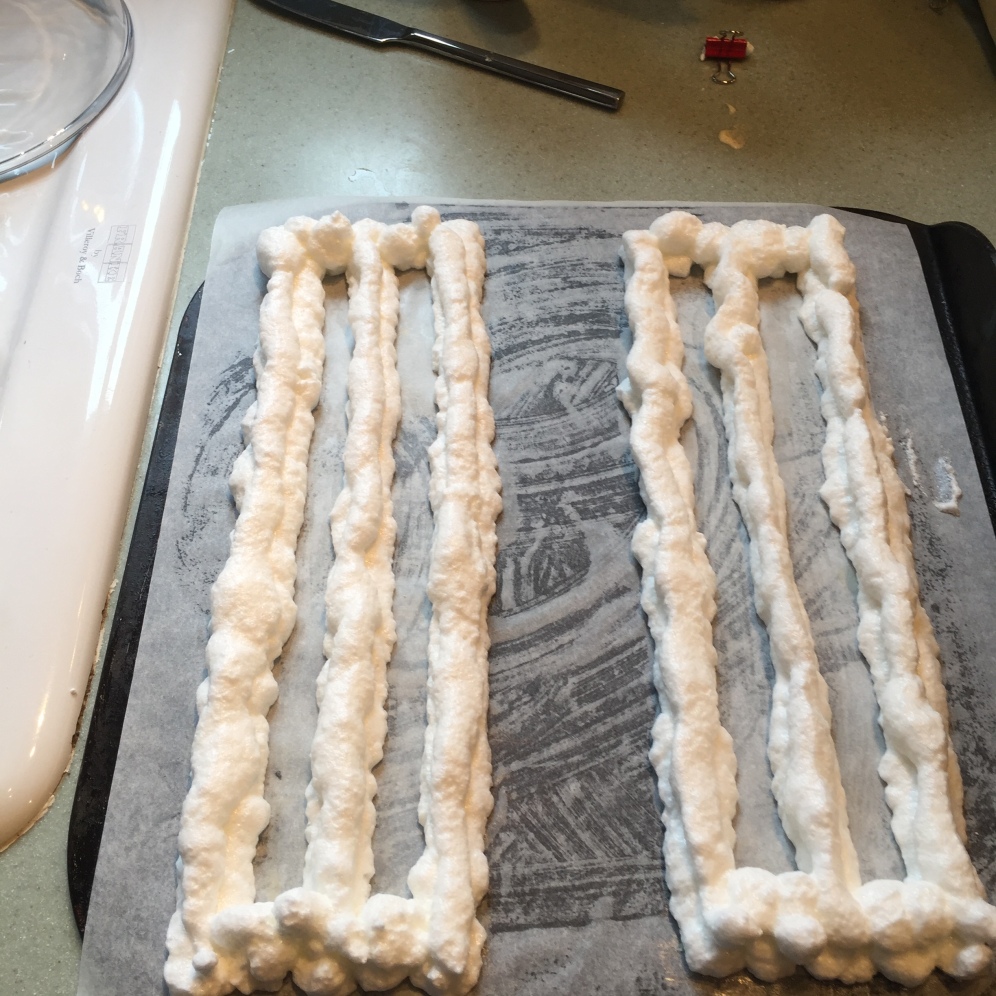 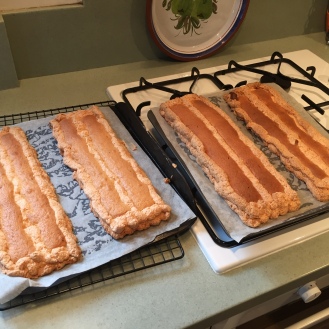 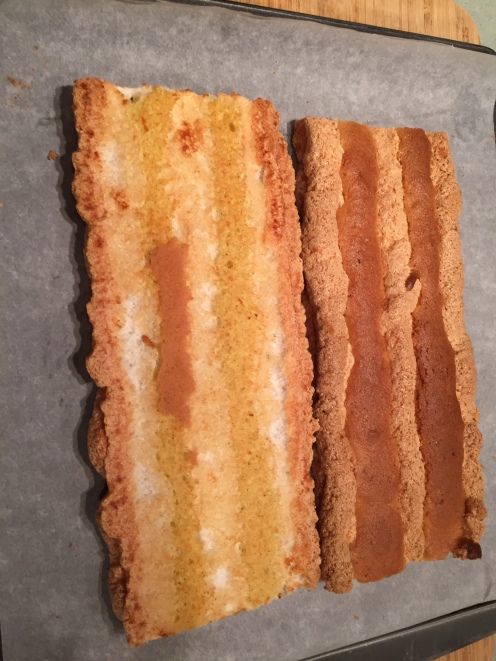 If you have read my post about preparing for this bake you will know I got into a panic about a German ingredient called Sahnesteif, used to stiffen whipped cream so it holds and stores better.  In the absence of the magic ingredient I have used gelatine – 1tsp per 250g of cream. 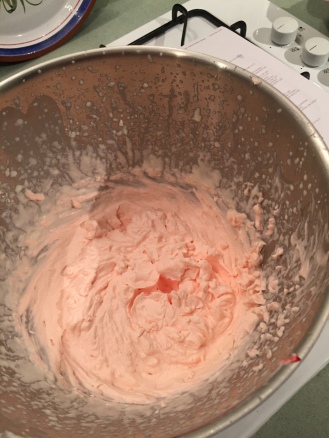 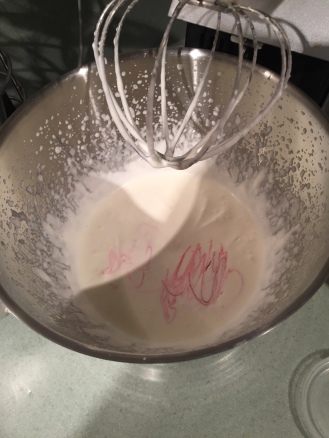 Well actually the next stage is to wash up.  The husband is most picky on this one and always comments on the amount of washing up baking seems to generate. 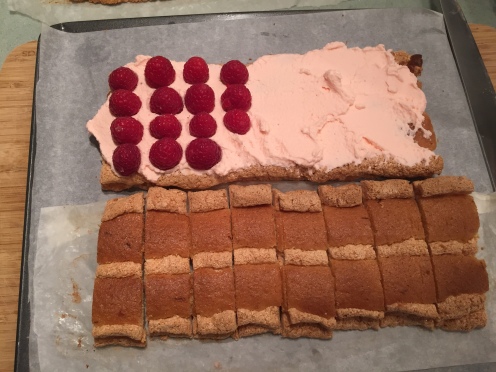 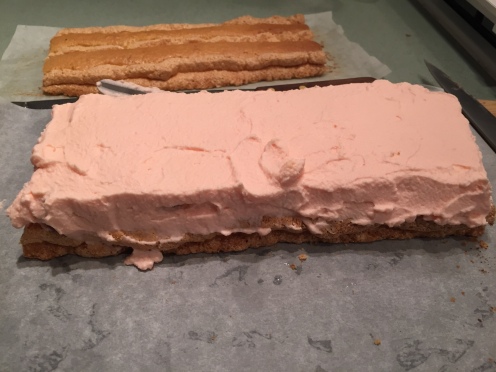