We have been having a very nice week off work at home, though as ever when one staycations, we have done a little too much round the house clearing out the dust from the building work and catching up on the garden.  I may have also taken on a little too much when committing to my Easter baking marathon.

For my fifth bake I couldn’t resist these little fellows. We have a bit of a thing for hares (as you can see below) and something like this was a specific request from the husband who, like me, has a sentimental streak as wide as a mile which is one of his many endearing qualities. Also we were having our new neighbours Kevin and Birgit over for dinner and as Birgit’s parents come from Hamburg, I thought these cute plaited bunny rolls would be rather appropriate.

Why appropriate? Yes you have guessed it, I am in Germany again which is where the Easter Bunny (or rather the Osterhase) started life, from where he was taken to America by Lutheran emigrants to Pennsylvania, and then onto the rest of the world. The first written reference of the tradition dates from the 17th Century by Georg Frank von Franckenau in  De Ovis Paschalibus (About Easter Eggs), where he tells of a tradition in North Western Germany and Alsace where children were told of the Easter Bunny that hid eggs in the garden over Easter for them to go and find. In its way this is an Easter version of Santa Claus, another German tradition that has gone across the world.

There is a completely unfounded reference in the 19th Century by Jacob Grimm that the Easter bunny tradition came about because the hare was the companion of Eostre, the Anglo saxon goddess of dawn that only the British and Germans name this time of the year after.  However this is completely dismissed by most experts even though it has gained massive traction across the internet. Outside of Grimm there is absolutely no reference to Eostre and her Hare and the early Christian church would not have allowed pagan practices to continue unless they had already co-opted them.  That being said, Medieval Christianity did use hares as a symbol of the Virgin Mary because it was believed hares were hermaphodite and reproduced without breeding,  but this stems from theories first expounded in classical literature than Saxon goddesses and was not specific to Easter.

The most likely explanation I have found is that what came first was the Easter egg hunt.   Children running through the fields hunting for eggs disturbed rabbits and hares who were seen running away from where the eggs were hidden.  The adults then created the story that it was the rabbits and hares that hid the eggs, rather than the adults themselves.  I think this is much more plausible and rather sweet. 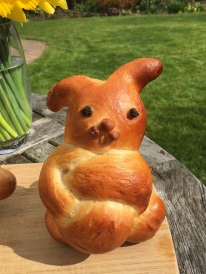 Whatever is the truth,  what we have now is a fun and cute tradition involving rabbits made from chocolate (who can resist those Lindt Chocolate bunnies that come in so many sizes), and in Germany  (and now in Suffolk) bunnies made from bread, biscuit and sponge. If you google “Osterhasen backed” as I did, you come across some fine examples, and I jumped for the one on Sara Hindrichs’s blog Zeitlos-Brot (Timeless Bread) which will be much visited by me over the next few months. 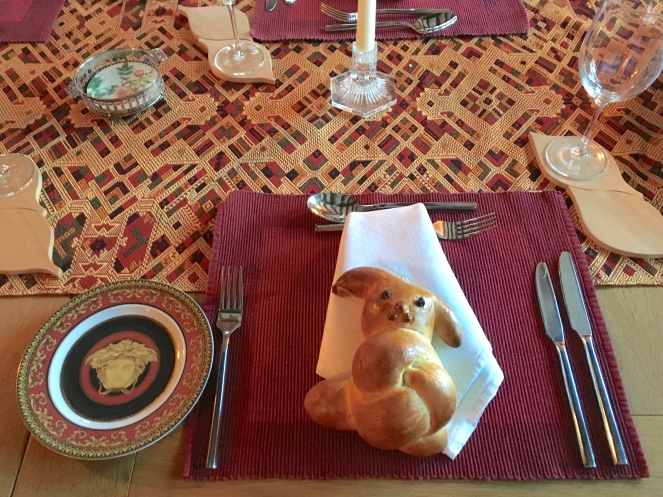 This bake is just fun and will bring a smile to the faces of adults and children  (it certainly did to Birgit and the beloved’s). The plaiting is a little tricky and having some bread experience will help you through, but even without a lot of experience give it a go.  If nothing else, working through the plaiting will remind you of playing with play-doh as a child (though without that delightful play-doh smell). 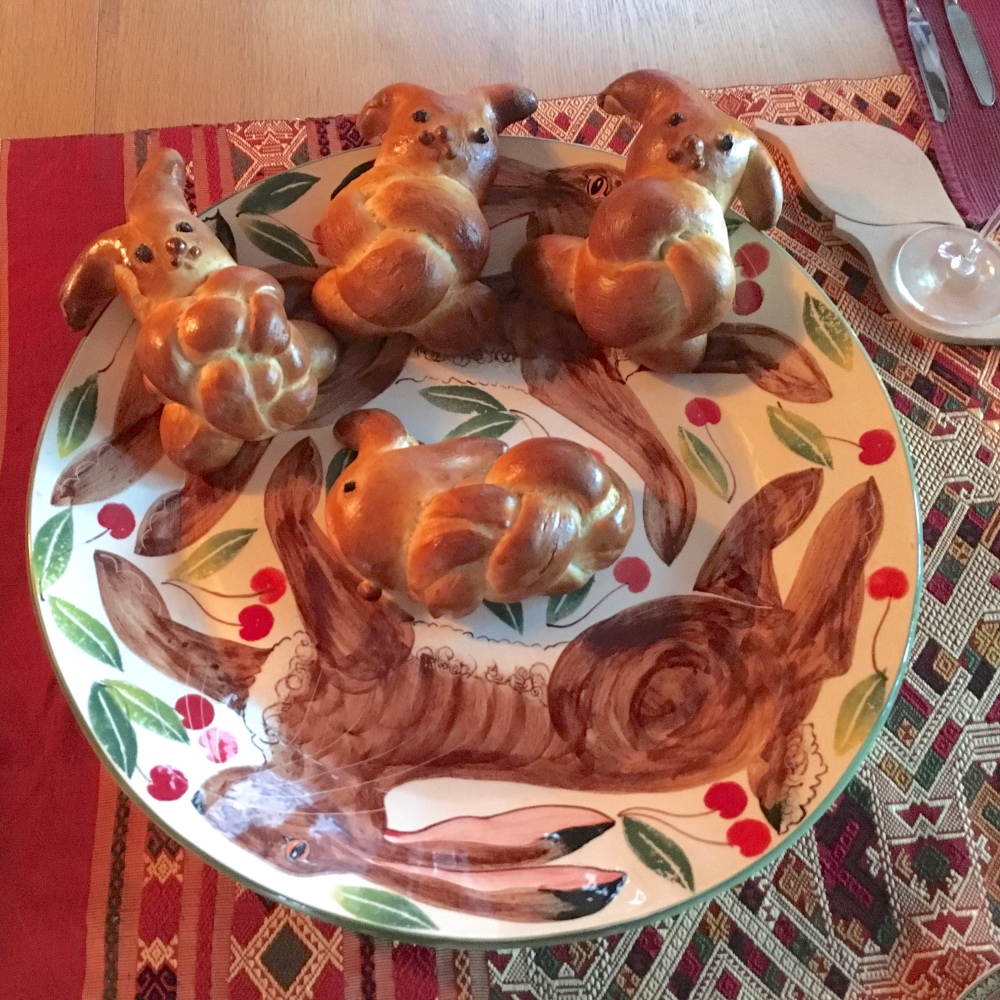 So here are some pointers about this bake that you should watch out for .

The rabbits are made in 9 stages

Dividing the dough for the stood up rabbits 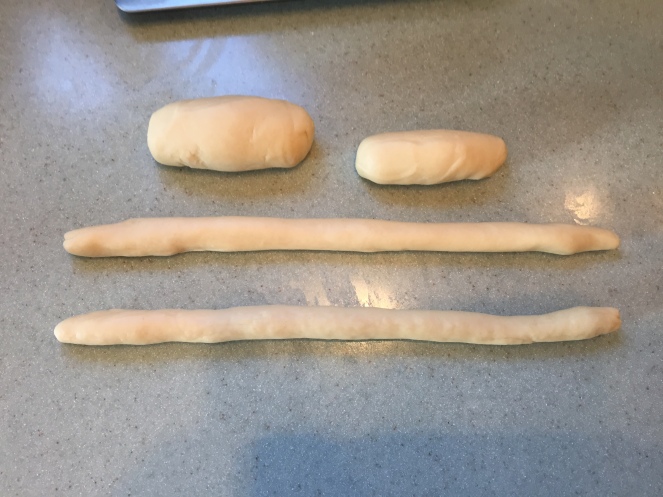 Dividing the dough for the laying down rabbits

To make the head and ears (applies to both sorts) 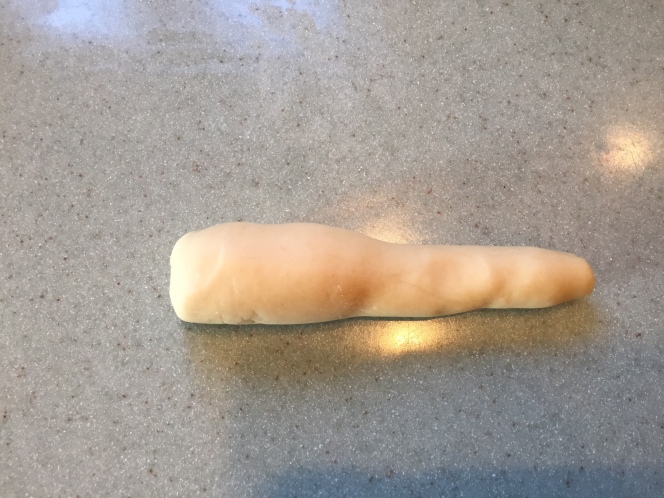 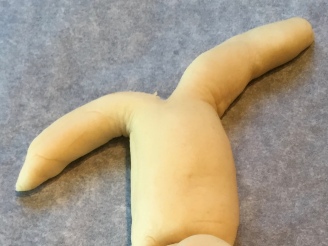 To make the legs (stood up rabbits only)

Making the nose and eyes 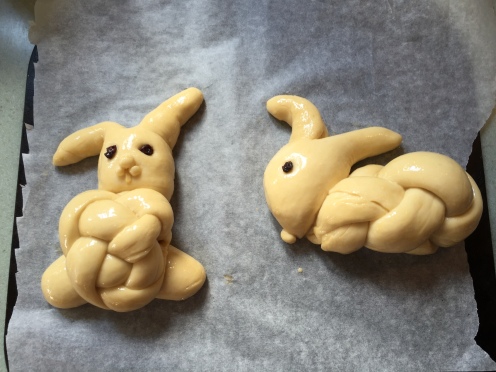 Take a look at Sara’s video.  I have tried to recreate each one as much as possible in photos

The Vienna knot (the hardest) 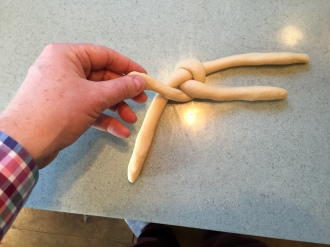 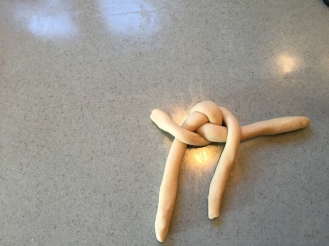 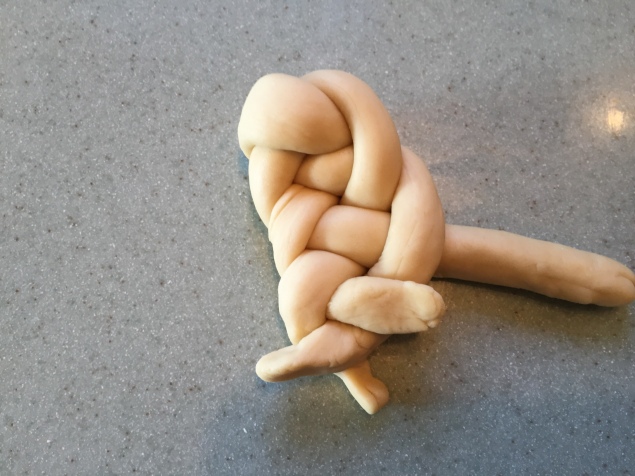 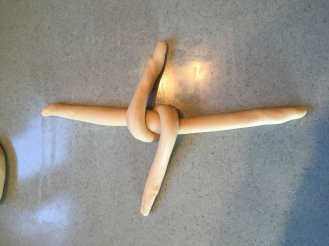 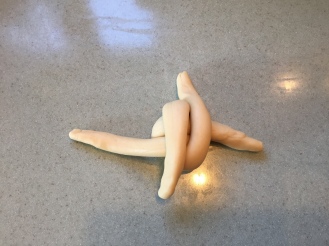 For the Knot (easiest) 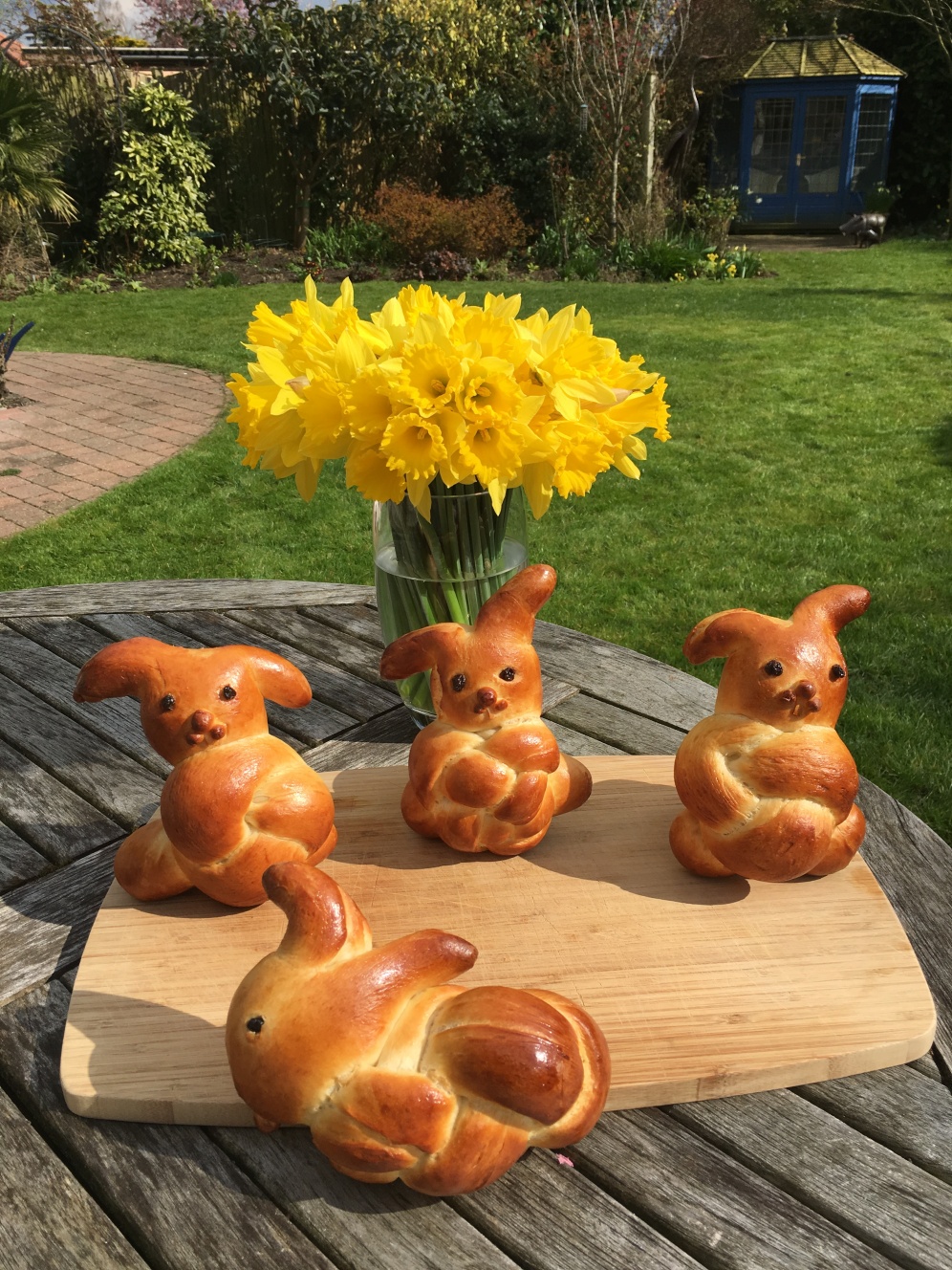