After achieving my new slim body,  I have been investigating whether no sugar, low GI baking is something that may help me maintain my weight and still enjoy the products of my baking. I have had a few mini experiments but this was by far the the best one and deserves a blog post. After one false start I produced a lower calorie (33% less than normal) cheesecake which I was very happy with and my guests were surprised used no sugar low GI ingredients. 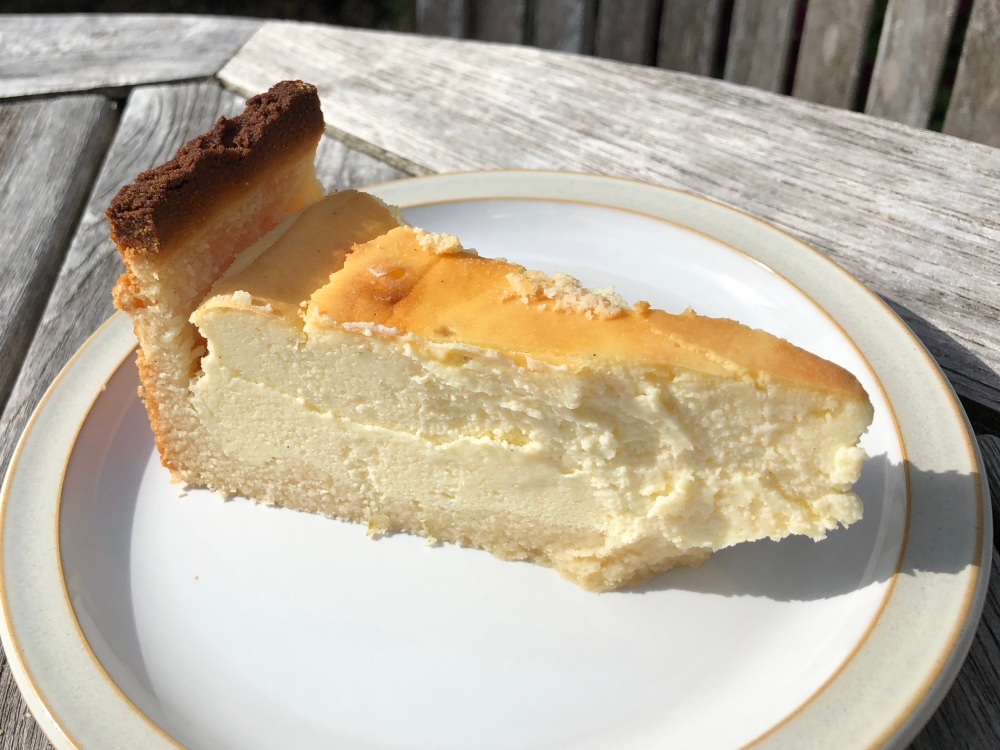 On the sweetener front you see many articles extolling the virtues of the so called “natural sugars” like honey, maple syrup, dates or agave syrup.  However if you are about blood sugar or calorie control, these don’t really cut it as at the end of the day all of these are just normal sugar in another form.  They are just as high in calories and have exactly the same impact on blood sugar as granulated sugar (in the case of dates even more impact!). They also have a different composition to normal sugar which makes them tricky to use when replacing sugar in your favourite recipes.

My research brought me to the zero calorie natural-ish sweetener  Eryrthritol. which comes in granulated and powdered (icing sugar) form and can be purchased in health food shops and Amazon. Pictured below are 2 brands, but there are many others at lots of different price points (not being heavily subsidised like sugar, it is a little expensive). 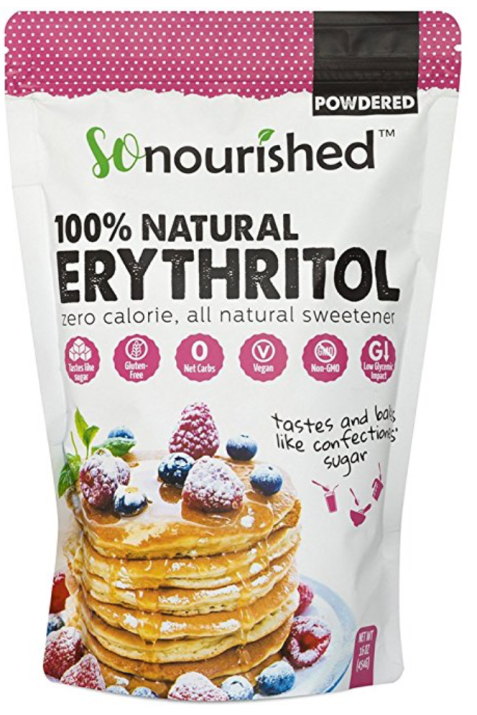 The name makes you shudder a little as it conjures up thoughts of chemical additives,  but it is miles away from artificial sweeteners like aspartame and saccharine. It occurs naturally in pears, melons and mushrooms and has been used as a food sweetener since its discovery in 1848 and is commercially produced by fermenting glucose with a very specific yeast.  If you want a bit of science this article is about as technical as I could take but still reassuring.

It has no calories because the body is unable to digest it whilst it has the sweetness that is about 70% sugar.  Like its cousin Xylitol (which unfortunately has 30% of the calories of sugar so is less useful for low calorie GI baking), there are reports it is not suitable for people with digestive problems like IBS and has been reported to cause diarrhoea when eaten in large quantities (not that I can find anywhere what “large” means).  Despite those warnings, I also found it re-assuring that it has been used in Japan since the early 90’s for low calorie foods.

Lastly if you are still not convinced, it is worth stepping back and thinking about sugar and its production a little when comparing it with Erythritol. Firstly it is just as “produced” from its natural origins as Erythritol in that it goes through a number of industrial steps before becoming what we use. It also has quite deadly health risks like diabetes, high blood pressure and high cholesterol if eaten in even moderate quantities over the long term, not to mention shorter term ones like tooth decay – far worse than a few too many trips to the bathroom.

Flavour wise it does not seem to have a marked aftertaste, though it can feel a little cool on the palate.  In contrast I have tried Stevia, which also has natural origins, but that definitely has an aftertaste that I find not wholly pleasant, and has the distinct disadvantage in baking of not having the bulk of sugar because it is 200 times sweeter than sugar.  This  makes it tricky when adapting existing recipes though it is used to make up for the sweetness shortfall of Erythritol.  Having done one cheesecake with and and one without Stevia, I shall be leaving the Stevia out next time and just accept the lower sweetness levels.

On the flour replacement front there are really only 2 options – Coconut Flour or Dried Almond Flour (don’t get the latter confused with ground almonds which is also called Almond Flour in the US).  Both have very distinct flavours based on their base ingredient so you need to be happy with the taste they bring.  They do however have a substantially lower Glycemic Index Factor compared to ordinary flour

From what I can see, Coconut flour seems to be the THE ingredient in low GI gluten free baking.   Some of its characteristics are that it has a very distinct coconut flavour which you will either like or not, and it behaves very differently to normal flour as it absorbs a ton of moisture.  That means you usually use twice as many eggs in any recipe using coconut flour, compared to one using wheat flour. This recipe uses coconut flour pastry which is an interesting proposition.  and because of the high egg content it tends to brown very easily so can look overcooked.  The texture is very crumbly which makes it tricky to roll neatly. The knack is to roll it between 2 sheets of greaseproof paper, cut it size and carefully lift it into your dish.  It certainly cannot be flopped over your rolling pin like normal pastry.  The alternative is to go for the rougher look of tearing bits off and pressing them int your tin.  Both ways are successful and I did manage a neat finish but there was a hell of mess all over the kitchen unit (and floor) by the time I had finished. 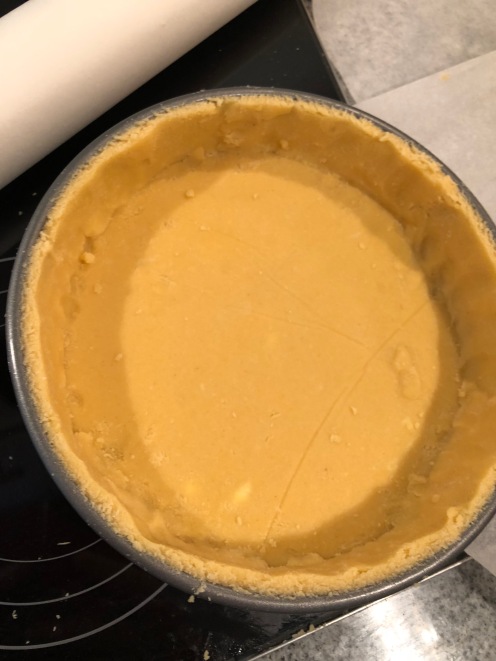 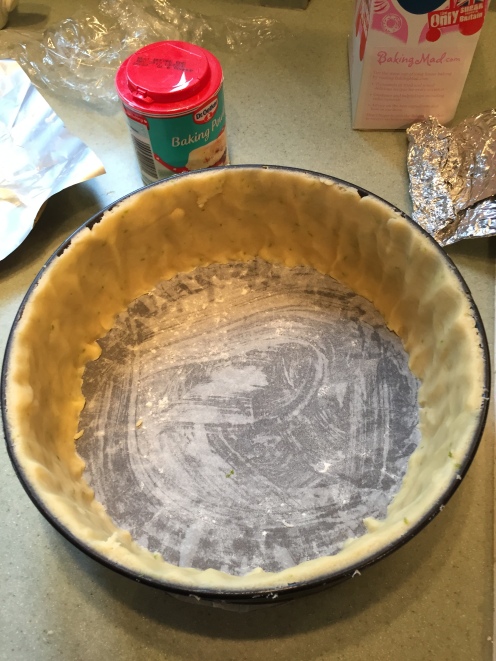 My first attempt at making a cheesecake was for a dinner party with my siblings and their spouses before abandoning my own spouse for a short business trip to Las Vegas (god that place is completely nuts).  The recipe advocated blind baking the case, but completely underestimated the cooking time of the mixture making the pastry very dark (ok over-cooked).  The filling was also grainy which at the time I was not sure whether it was down to the Erythritol or the recipe or my baking (it was my baking!). 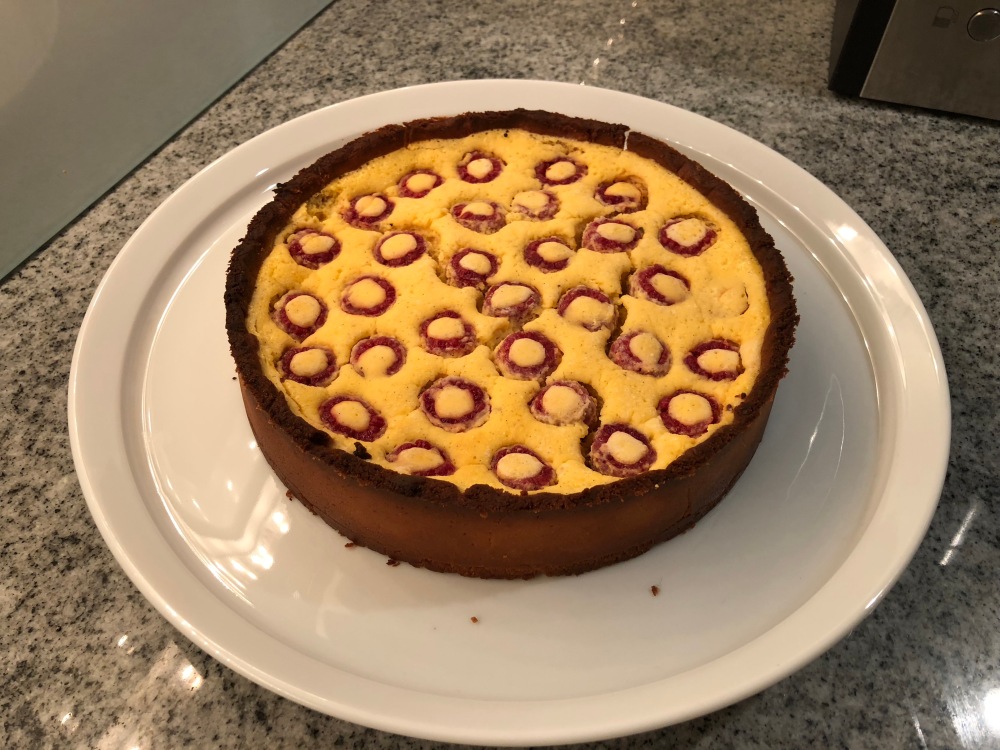 It was tasty though and I decided to try it again, though this time with a well tried favourite – my Quark Cheesecake. The result was much more successful and came out with exactly the same texture as I achieve with sugar.

As I said I did try Stevia to compensate for the 70% sweetness shortfall of the Erythritol compared to the same bulk of sugar, but it definitely contributed to a very slight aftertaste so will not be bothering again. The pastry was not blind baked and came out a little soft which is a standard problem with this recipe which I need to work out how to address (take off the insulating band earlier I think).  It was however nowhere near as dark as the first attempt, though at the exposed edge it still acquired that over-tanned look.  One thing I did notice is the “granulated” variety does not cream with butter well, and definitely looks curdled when you add in the eggs.  It came good though once you added the remaining ingredients.

Will I be using Erythritol again – definitely.  Coconut flour pastry ….well maybe from time to time – not being gluten intolerant it is less of an issue and the calorie saving is not that great.

Follow my Quark Cheesecake recipe but replace the sugar with granulated Erythritol increased by 20%, and the pastry with the recipe below. 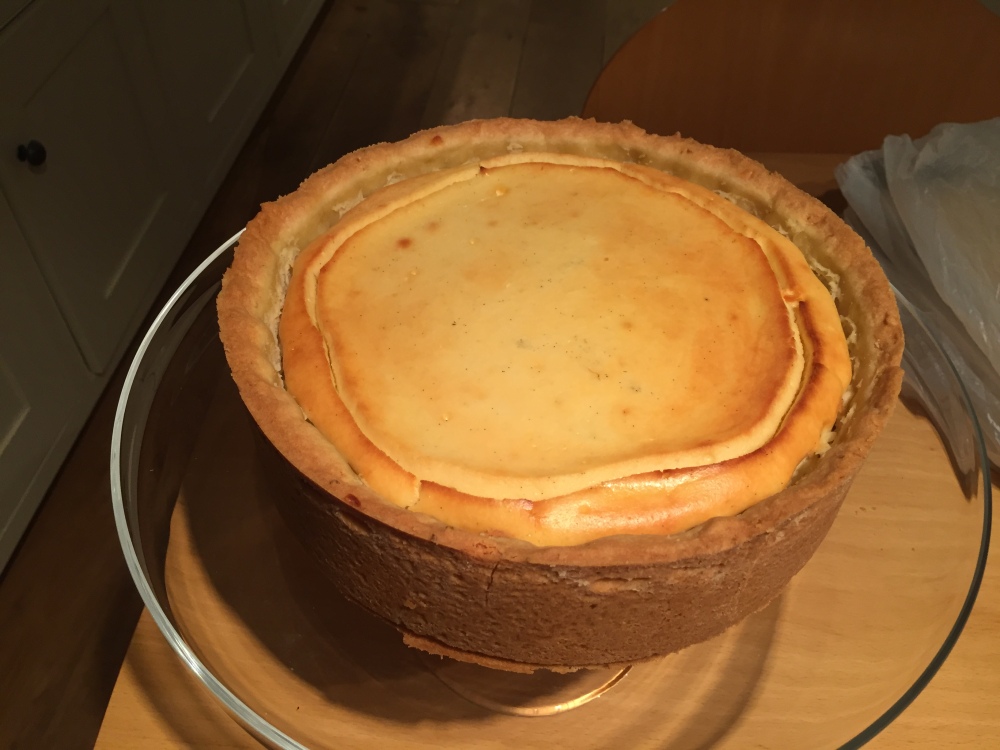 If you want a rolled sheet, roll the dough between 2 sheet of greaseproof paper, it is impossible to roll any other way.  The other technique is to  tear off small chunks and press the pastry into your baking tin.

Baking times are the same as for normal pastry but be aware that when blind baking this pastry browns more than normal pastry. 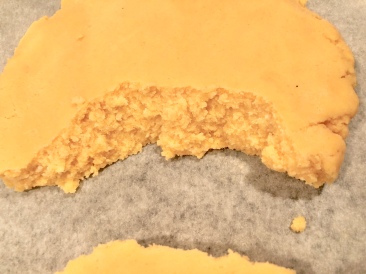