It has been way too long since I wrote and baked.  The summer is never a big baking season because the garden takes up more of our time.  This year though, the baking gods lost their prominence to other ones playing with my fate. Late summer heralded a sudden and alarming spread of damp across our ground floor (hardly surprising once we realised the tiles were laid on a thin layer of cement and then soil –  the joys of owning a 16th Century House).  This necessitated what friend called an architectural dig involving the whole ground floor being excavated.  Then to crown it all a couple of middle aged health issues mean I have finally run out of excuses not heeding the doctors’ warnings to address my weight. 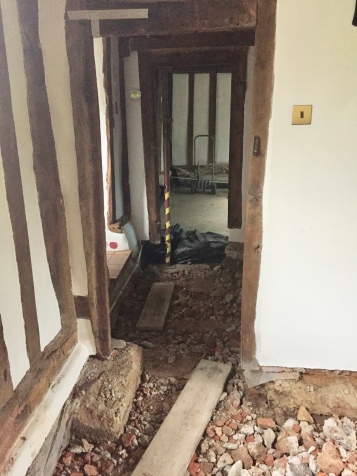 The Great Suffolk Dig Out should is finally over having dramatically reduced our bank balance. The Great Belly Reduction is proving trickier.  At 54, losing weight seems to be much harder and despite a dramatic reduction in wine and food intake, the weight is just not falling away in the way it used to. That has even driven me to trying to to take up jogging using the very good NHS Couch to 5k Podcast series, much to the amusement of our neighbours and him indoors.  I am also very aware the gain in 20kg coincided with re-discovering baking, so I am going to have to go on a baking detox for the time being and somehow learn how to stay thin and enjoy baking (tips very welcome).

All this has been even more frustrating because The Great British Bake Off has been on. As with all fans of the show, I was concerned about the move to Channel 4 without Mary Berry and Sue and Mel.  It has however been a huge success and the old show is still there in all its glory, as long as you record it and fast forward through the ads.

I love Prue Leith, Mr Hollywod seems to have mellowed,  and once Noel Fielding and Sandi Toksvig relaxed they made great presenters.  And the contestants!  They were frighteningly good.  Young Liam was robbed, Kate’s perseverance was impressive, poor superb Steven fell at the last hurdle by trying to do too much and Sophie very much deserved her win.  I have been inspired to try more patisserie, craquelin topped choux buns, sfogliatelle and an Entremet with a mirror marble glaze is definitely on the cards for a dinner party coming up soon.  I definitely need more practice with caramel and iced biscuits (well biscuits generally) and there is also the Everest to climb of learning to work with chocolate which may require a short class to get the basics in.  I am even slightly intrigued with illusion cakes that featured in Episode 1.  Canadian YouTuber Yolanda Gampp has some fabulous creations which must be tried one day.

All of which of course is firmly on hold for a while until those 20kg disappear.  So in a final attempt to make a positive into a negative I guess I now have a clear incentive – lose those 20kg and I can start again.  That must be why the beloved is nagging me so much!

All is not lost on the blog though.  I have been preserving the autumn garden produce, Xmas is coming and there are a few items I never blogged about, so watch this space!