It has been a long time since I posted anything on the blog.  Work has taken over my life in the last month as I am leading a major systems upgrade which goes live in 2 weeks time.  Much nail biting, many sleepless nights, and a lot of hours have meant there has been little time to bake, never mind write about it.  I dare not tempt the Gods by predicting the success of the project and we have a lot to do in the next 2 weeks, but I have been ordered by my team (who I suspect I am driving a little mad) to switch off for the weekend and most charmingly I have been locked out of the test system for the weekend so I am not tempted to carry on testing and probing it. As a consequence I have had a lovely morning on the sofa, and my thoughts returned to the my neglected blog.  Fortunately there is a little bit of a backlog from a month ago.  So here goes ……

I haven’t posted much about bread because it has become such a staple in our household, especially a sourdough loaf slowly proved over a Saturday.  I have taken it a bit  for granted when it comes to the blog (though I have a plan for that one). There is however little point in making all that bread with nothing to put on it.  Marmite, peanut butter and cheddar cheese is a particular favourite of the pair of us (I hear 50% of Britain retching at this point and the rest of the world wondering what on earth I am talking about – check out this article on the topic).  However nothing beats homemade jam.

When we first moved up here I turned into a bit of manic country housewife.  The baking you have read about was part of that, but the venture into Jams, Chutneys and Preserves came first and has not been written about.  It started when we discovered the neighbours’ tree hanging over our fence was in fact a plum tree, and come September it  was awash with beautiful small yellow plums.  I have an old fashioned aversion to food waste and the only way to make use of over 4kg of plums was jam and chutney. Vast amounts were made and we are still working our way through the first year’s jars.  My favourite was a Spiced Plum Jam, and my nephew developed a particular obsession for a Plum and Peach Jam I made of which there is only one jar left,  which may appear in his Christmas stocking.  The picture below is from 2011 when as you can see I went a little preserving mad.

The following year I discovered Damsons.  The variety we have here seems to be unique to Britain and was supposedly introduced by the Romans from Syria.  The name used to be the “Damascene Plum”  but has been shortened over the centuries to “Damson”.  It is not to be confused with the Middle European Zwetschge, a related variety, from which a gorgeous Schnapps is brewed, and many lovely cakes are made.

It is a cooking plum, not very fleshy (which makes for a long de-stoning phase when using it) and it is certainly not edible from the tree. When cooked, the skins impart a deep ruby wine red colour to the preserve and a distinct tart and intense taste.  You tend not to get them in the shops, and up until this year I have relied on a friend who has a huge tree in her garden.  4 years ago however  I planted 2 trees which I am keeping in 6 foot cordons and they fruited this year for the first time, albeit a little sparsely. To date I have made either Jelly which is lovely served with lamb or cheese, or a gorgeous Date and Damson Chutney that won first prize in the village show.  I have however never made Damson Jam and I have seen various people waxing lyrical about the intensity and uniqueness of its flavour. 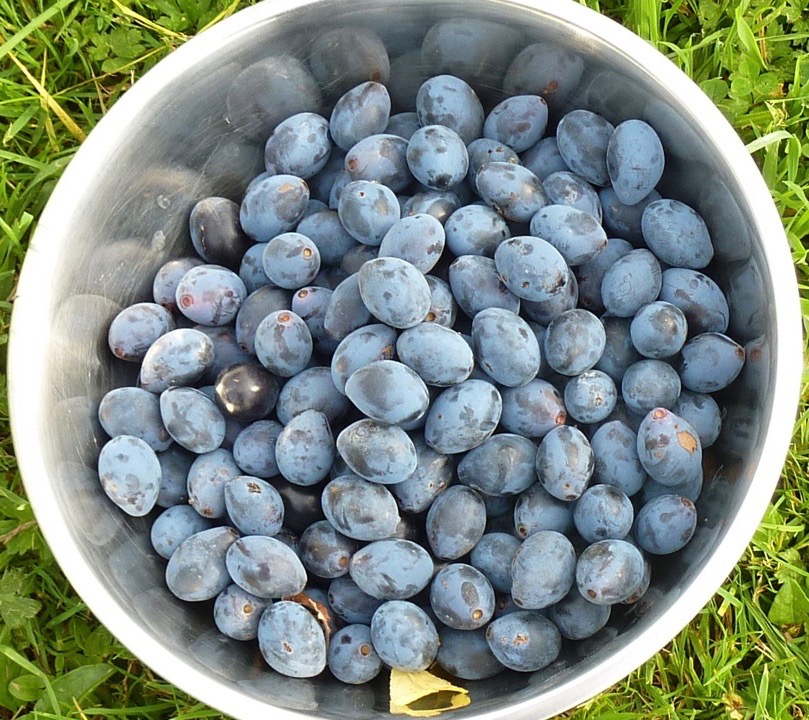 I had a crop of less than 1kg which does not turn into very much jam, so I dug through my books and found this lovely combination in Ghillie James’ beautiful book “Jam, Jelly and Relish”.  I realised when I hauled out the jam pan, that I hadn’t made jam for some time.  I also realised I had completely forgotten quite how much sugar goes into jam – a 2:3 ratio of sugar to fruit.  This of course is why it keeps for so long but it still comes as a shock when you are pouring 2 bags of sugar onto the fruit.

Jam making technique is not something I am going to go into detail on.  It is not particularly hard and you shouldn’t be put off by the reams of paper written about it.  The basics though are that you need to thoroughly clean your jars and lids, and sterilise them by baking them in the oven at 150C for 15 minutes just before filling them.  The fruit and sugar has to be boiled until it reaches the setting point of 104.5C.  This basically means just enough water has boiled off  the mixture so that it sets to just the right firmness.  Too far and you end up with rubber, too little and you end up with liquid.  There are lots of tests for the set but I prefer the scientific temperature measurement technique  – it seems to be more reliable than the manual “wrinkle test” technique (a dollop on ice cold plate which wrinkles when a finger is pushed through it is the most favoured one – see the picture below which is not of my finger I must confess).  I still do it as a final check but the temperature test rules for me.

The jam itself came out beautifully and is gorgeous on a lovely slice of toasted white sourdough.  The flavour is indeed unique.  Not overly sweet with an edge of tartness that counterbalances the sweetness beautifully. 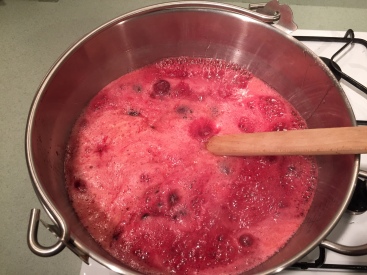