England was the birth place of the Industrial Revloution  and the rapid urbanisation in the mid 19th Centtury, combined with the reforming religious zeal of both the Puritans and the Victorians, has stripped us of many of our older rural traditions. Happily the Hot Cross Bun is not one of them. No other food item in England is more redolent of Easter. The fruity spicy bread bun with a cross on it is gorgeous enough as it is (and once you have made your own you will never go back to shop bought ones), but when it is toasted, and slathered with butter and jam, it is utterly sublime.

I can’t emphasise too much how important the toasting part is. Toasting the hot cross bun elevates it from a fruity bread roll to a piece  of heaven, reaching deep into the soul of an English man or woman. Toast holds a unique place in the British heart and having travelled to many places in the world we seem to take toast much more seriously than any other nation. Many a drunken night out with hubby has been finished with toast (usually with Marmite and Cheddar cheese) and nothing beats a wonderful piece of toasted sourdough with butter and really good home made jam on it.

Now for a little bit of history: Buns with a cross cut into them have been around since Ancient times but the English version of a fruity spicy yeasted roll most likely goes back to the high Middle Ages once the Crusades opened up the spice trade into Europe. Putting crosses on bread happened at all times of the year until the Protestant reformation when the practice was stamped out because it was regarded as idolatrous and “Popish”. We know Elizabeth I banned the sale of them on any day except Good Friday and Christmas in an early attempt to calm disputes between Protestants and Catholics over the bun (with the Protestants trying to stop them altogether). The earliest written recipe dates for the 18th Century and today’s recipe really comes from the Victorian era where the sale of Hot Cross Buns on Good Friday caused great excitement.

There are many superstitions about the bun which attest to its ancientness. A bun hung  on Good Friday will never go mouldy, eating one will cure all ills, taking one on a ship voyage will protect against shipwreck, and hanging one in a kitchen will protect against fire .

I have just discovered there are two London Hot Cross Bun traditions that have been running since Victorian Times and can still be seen today. One involves a widow, whose son was at sea, who hung a bun in her  kitchen on Good Friday to await his return. Sadly he never came back but she kept the tradition going. Since the mid 19th Century The Widows Son, a pub in Bromley by Bow supposedly on the site of the widow’s house, has been honouring the widow by having an annual Good Friday  event where a sailor hangs the bun in the bar to protect all sailors at sea. I suspect the ceremony had more to do with a wily Victorian Landlord drumming up trade, but you never know. You can watch a short video by clicking on this link.

The other tradition is a little less boisterous but harks back to the bun’s religious significance.  Every Good Friday St Bartholomew the Great Church in Smithfield blesses the Hot Cross Buns and hands them to local Widows, along with a sixpence (2 and 1/2 pence in new money). The origins of the ceremony is ancient and unknown but  Joshua Butterworth gave a bequest in the late 19th Century to keep it going, since when it has been known as the Butterworth Dole.  Again there is a small video here. 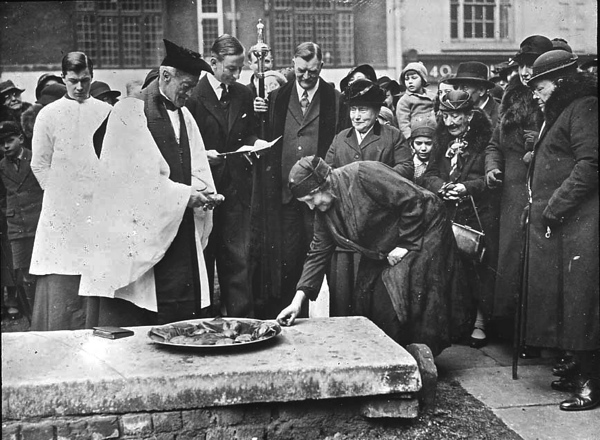 The bun has gone all round the English speaking world and is even wildly popular in Karachi which is heart warming in these times of religious intolerance in the region.

Outside of the UK the recipe has seen variations involving chocolate and toffee, and fruits like cranberries and dates, and with the crosses made from icing or fondant  (please stop it my colonial cousins) but if you want the real thing you should avoid such innovations and stick with the classic, and once you have made your own you will never go back to even the best reviewed buns you can find in the shops.

Even the classic has some variations. Paul Hollywood adds apple to his to add moisture which I must try some time. Nearly all use mixed dried fruit – a combination of mixed peel, sultanas, raisins and currants – though some up the mixed peel content. The spice is usually Mixed Spice, but  Nigella Lawson adds cardamom which I am not sure about. The dough is enriched with eggs, combined with milk and butter or cream, and the dough is sweetened with sugar or honey. For the cross? Frankly a simple paste of flour and water is enough. And last of all the glaze – a simple sugar syrup is my preference but others use apricot jam or honey which have never appealed. The jam is for the middle of the bun,  not the top. 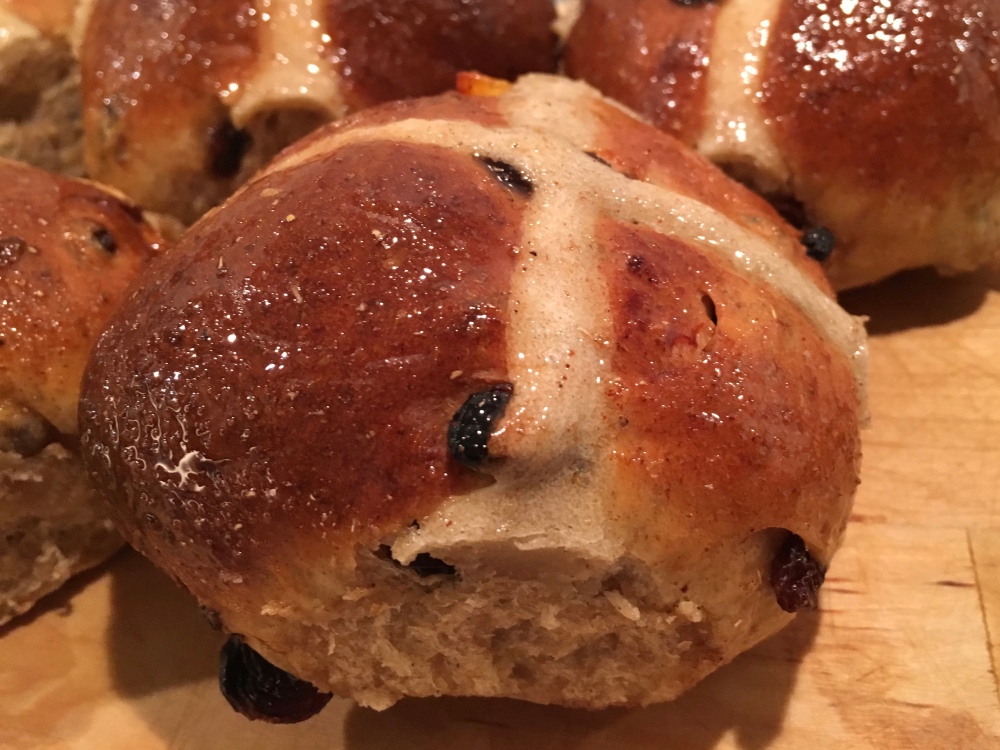 I started baking these beauties with Dan Lepard’s recipe, and have stuck with it through thick and thin. For this post I was determined to be  unfaithful to him and  stray to another recipe but frankly no other feels quite so luxurious as his.  It includes cider, double cream and honey and the dough has a small amount of whole meal flour  which makes the buns a little bit denser which is much more to my taste.

So where are the awkward bits to this bake?

Firstly this is an enriched dough with spices and fruit. This is a triple whammy for the yeast and you must get the yeast really active at the start and keep the ingredients warmer than you normally would. You just need to be patient with enriched dough. It takes what feels like forever to rise (as I discovered to my cost when I tried a sourdough panettone – a story for another day!).  Allow 4-5 hours end to end for making these buns even though there is only maybe 30-45 minutes of actual work in that time. 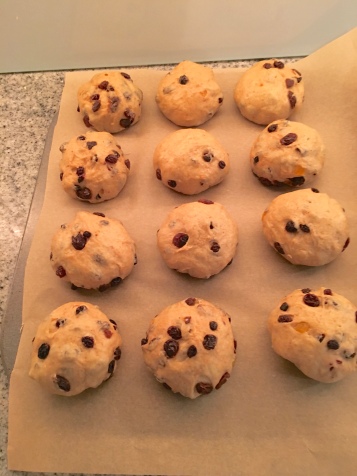 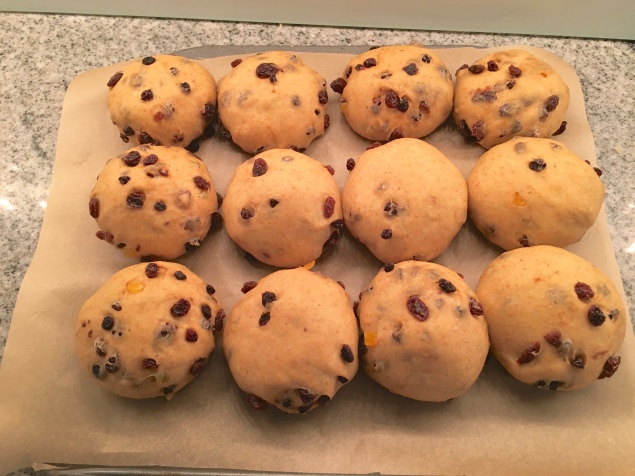 The crosses are also surprisingly tricky. This year for the very first time, my crosses did not break while the buns rose in the oven. The trick seems to be  a simple flour and water thick paste, keeping the piped crosses thin (no more than a 1/2 cm hole in your piping bag), and ensuring the second prove has been done long enough to ensure they don’t rise too much more in the oven. You can see the difference between the picture on the left which was my very first attempt 5 years a go and this year’s on the right. 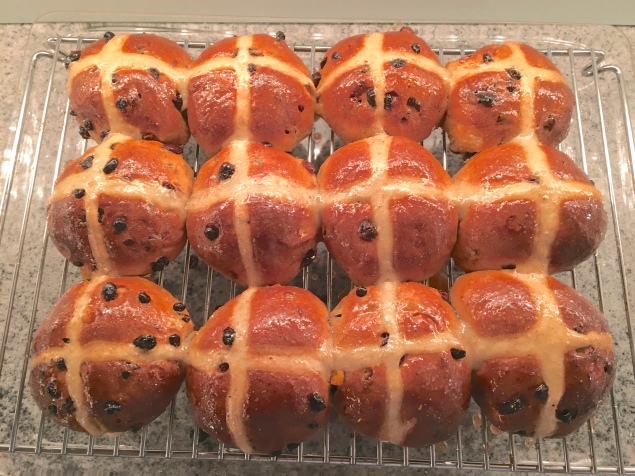 I have reproduced Dan Lepard’s recipe below but I have changed the method and the crosses from his to one I think is more effective.  I have never agreed with his kneading method as  I believe it leads to a less firm crumb, and adding the fruits after the first prove not only saves your beloved from finding dried fruit shrapnel all over the kitchen, but it meant the dough was  more active than I have found in the past. Lastly I don’t add oil to the paste (as he suggests) and mix it thicker and pipe it thinner than he recommends.  Now I know to Dan acolytes this is sacrilege and I have committed blasphemy, but even the second God of baking after the Goddess Mary Berry (may her bottoms never be soggy and her sponges always rise, hallelujah amen) is not infallible.

For the spice glaze 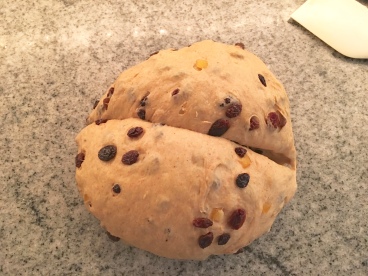 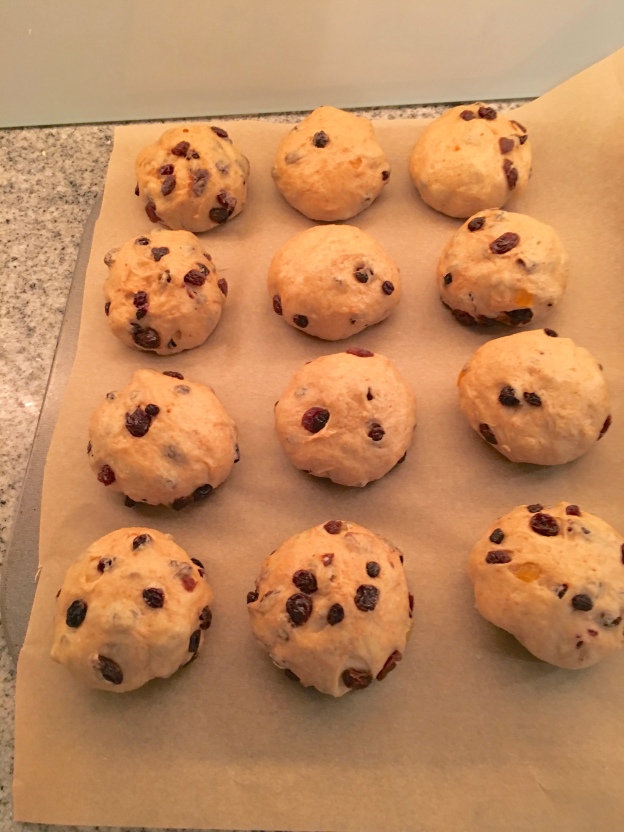 The crosses and the bake 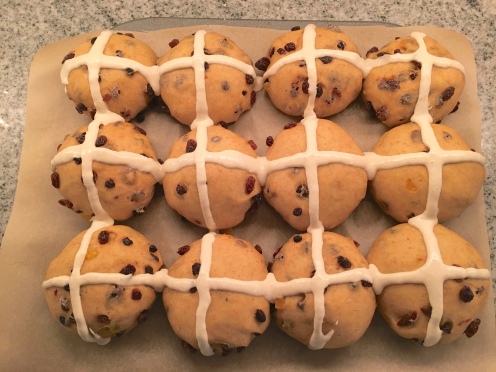 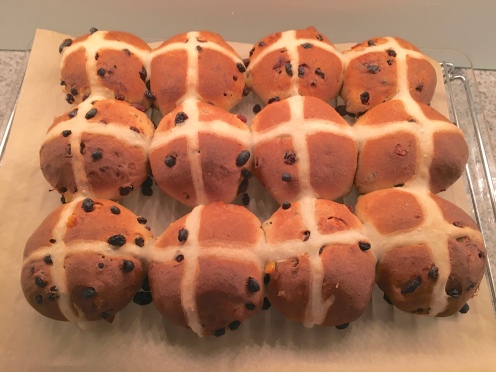 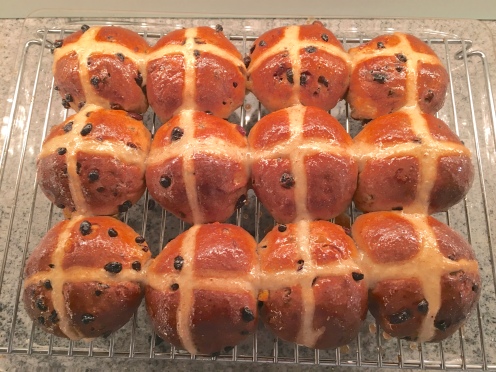 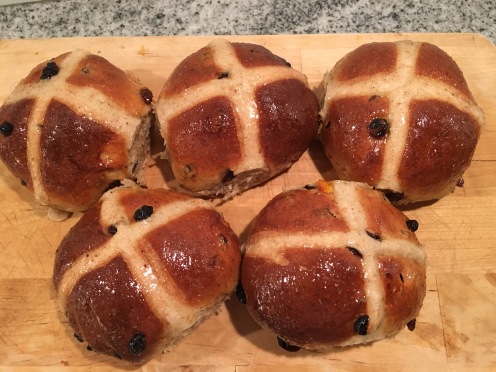