I was thinking this week might be the week to try biscuits, something I don’t make very often.  I had found some marvellous ones on Hanuma kocht, the blog that helped me with the Kardinalschnitte, but I realised I can’t bake next weekend so have decided to keep biscuits to next week’s challenge as it may have to be done in the evening after work.  That being said Elma’s Lemon biscuits do look pretty fiendish so they may need to wait for another weekend.

A more challenging bake is required and I don’t want to leave Germany quite yet.  The  lovely Martin, from the choir we sing in, suggested the Prinzregententorte (Prince Regent Cake), which is a seven layered genoise with chocolate buttercream and a chocolate cover.

Now the Prinzregententorte is a very Bavarian repast first invented in honour of Prince Regent Luitpold in the late 19th Century by baker Heinrich Georg Erbshäuser. The Cafe still exists though from the photos I am not sure i will be hurrying to visit. Munich has some much nicer Kaffe und Kuchen haunts.

The Prinzregententorte  is a paean to Bavaria (Bayern in German).  The 7 layers represent the 7 provinces of Bavaria  (Oberfranken, Mittelfranken, Unterfranken, Schwaben, Oberpfalz, Oberbayern, Niederbayern).  It used be an 8 layer cake until Rheinpfalz became part of the Rheinland-Pfalz state.

And who exactly was Prince Regent Luitpold who inspired this little beauty?   Well here he is in all his late 19th century beauty. He was the uncle of Ludwig II (the one who built Neuschwanstein among many other marvels) who was deposed  and possibly murdered for his extravagance which was bankrupting the Bavarian state.  Luitpold was never king because the legitimate successor was Otto I who unfortunately was as mad as a march hare possibly caused by syphilis.  Luitpold is on the left, followed by his unlucky nephews Ludwig and Otto. 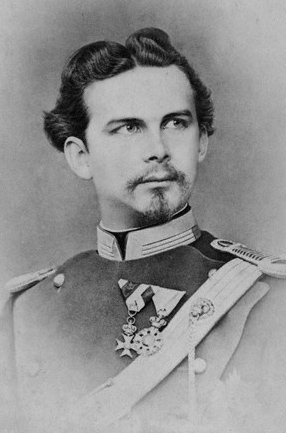 Luitpold is somewhat revered by the Bavarians and his reign as Regent is looked back on as a Golden Age.  Given what came after he died in 1912 that is hardly surprising.

And the cake?  Well it looks particularly fiendish.  The 7 layers are made individually by spreading genoise batter on baking paper, and the butter cream filling  is German Butter Cream which I didn’t know existed.  It is in fact one of 6 (Amercian, Italian, Swiss, French, German and rather disappointingly …Flour), which may all have to be tested over time. German Buttercream involves making Creme Pat and whisking in butter.  There are fruit and chocolate varieties and the various blogs seem to say it is much lighter than the standard buttercream we know which is just icing sugar and butter. And to finish? Well all I need to do is temper chocolate and pour it over the top to achieve a shiny and smooth finish.  No pressure then.

I am now tracking down recipes.  This cake seems to be little known outside Bavaria and there are far fewer videos or recipes on the interweb than normal.  Added to all that, the curse of the Dr Oetker Päckchen is everywhere – what in lord’s name is Chocolate Pudding Powder (Schokopuddingpulver)?   Please stop it my good Doctor and let us use the real McCoy (which does not refer to the chap from Star Trek) rather than your little condiments.

So the hunt is still on for the best recipe.  Come back on Sunday to find out how it all went.