Panetonne, that wonderful delicious light fluffy and fragrant Italian Christmas Bread that melts in your mouth ………and is an absolute nightmare to make in the traditional way.  I have now tried 3 times and every single occasion has failed and failed badly. 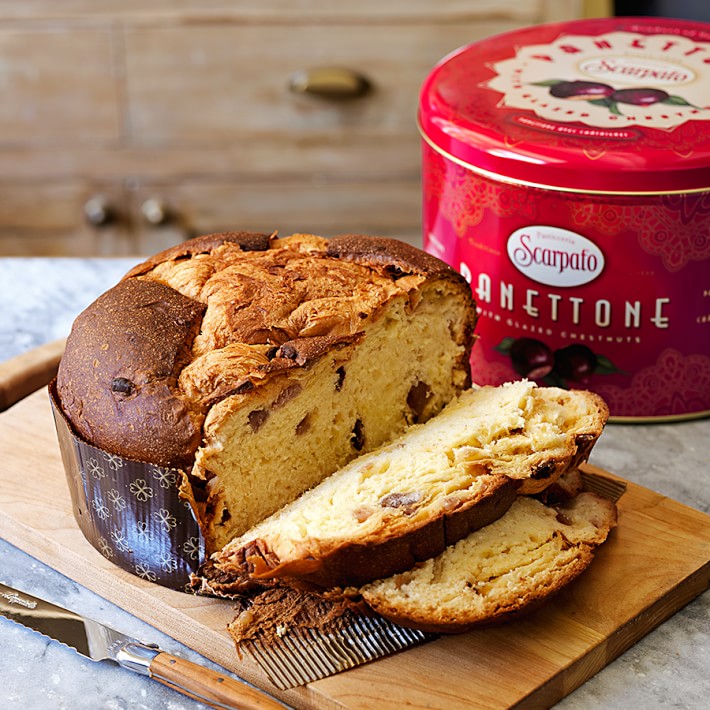 So what does “make it the traditional way” mean?  Well first you use a natural yeast (sourdough) starter that has been “sweetened”.  This sweetening process involves removing the sour taste of the starter by refreshing it every 4 hours for at least 24 hours before you plan to bake.  The perfectionists advise 4 days beforehand as the ideal time!  You then have to do at least 2 rounds of kneading and 3 rises.  That can take up to 48 hours.  The dough has to triple in size before baking and then rise again in the oven and it is so light that if you don’t cool it upside down it will collapse back on itself like a soufflé.

Added to all these complications the dough is very very sloppy and difficult to create. It has a high butter, egg  and sugar  content which  all inhibit the development of gluten and the the yeast development.  Some devil invented this bread. He or she wanted something that is light and fluffy but then he added ingredients that work against achieving either of those of qualities.  A more complex and difficult bread in my opinion, does not exist.

Now there is an easy way to do panettone using instant yeast and higher flour content and avoiding the multiple kneads and ferments and I might yet resort to this, but I am a bit of a perfectionist and wanted to do it the “proper” way.  Hmmmmmm……

So what happened the first time back in 2014?  The plan was to make 4 and give 3 away as presents but I had not given any consideration to the amount of time the dough needed to prove and I was massively overconfident.  I fed the starter for 4 days beforehand though not every 4 hours (that pesky thing called work got in the way of that one).  The starter had no sour taste and was very very active so one big tick in the box there.   I had bought a bottle of Aroma de Panetonne, an essence specifically designed with the right fruit oils to give that panetonne smell and flavour, I had bought multicoloured rainbow candied peel, and of course I had eggs and butter by the lorry load.

I started with the first knead of a huge amount of ingredients, and realised immediately I had probably bitten off a little more than I could chew.  All I ever got through every step of the process was a gloopy and stringy mess, which I eventually put in the panetonne baskets in the vague hope something would come of it.  Well they barely rose over 24 hours, and I was out of time so I flung them in the oven to bake.  In great hope after baking  them I then hung them upside down between the kitchen chairs and settled down on the sofa with my mother for a cup of tea and a mince pie. Just as I was relaxing,  I heard a strange series of plopping noises in the kitchen.  Slightly alarmed I dashed in to see that the centre of each of the panettone had fallen to the floor.  The crumb was far too heavy  and gravity led to its inevitable conclusion.  My mother has dined out on that one for a very long time.

Attempt 2 this year started in the same way as Attempt 1. I was following a recipe by James Moreton and yet again at Stage 1 all I got was a gloopy mess. I kept the mixer going forever and then started throwing in extra floor in a  rather uncontrolled way (in my defence it was just before bed time and I wanted to get the first prove going) .  Big mistake –  it suddenly went from gloop to the tightest elastic band of dough I have ever created which was so tight not even a nuclear powered yeast would make it rise.  That had to go in the bin as well.

Attempt 3 went a little better. This time  I was following this recipe from the Wild Yeast Blog,  which I know from other books  and recipes is very authentic (I bought a tome on Pannetone  a few years back that is translated badly from Italian but is supposed to be THE book on this devil-designed bread).  I even managed to get to a decent fluffy dough albeit adding a little extra flour than proscribed. The resulting lovely pillow of dough went into the Panettone case and was set up next to the range – the warmest place in the kitchen  – at about 3 pm.  It was rising beautifully and I was getting optimistic. My only worry was we had guests for  Xmas drinks and with the rate of rise  it was looking like I may have had to bake while they were there.

At 6 pm on the dot, just as we were getting all the canapés  out (shop bought I am afraid), the house went completely dark.  We had a power cut which had taken out the whole village not to mention the heat source for my Pannetone. Our guests arrived and we had a delightful evening in candlelight which was completely enchanting and made us realise what evenings in the cottage must have been like for most of its history.  The Pannetone though seemed to have received a fatal shock from the loss of its heat source. Its was clear even in the dim candle light that the rise had gone into reverse as the Panettone had started to visibly sink back. 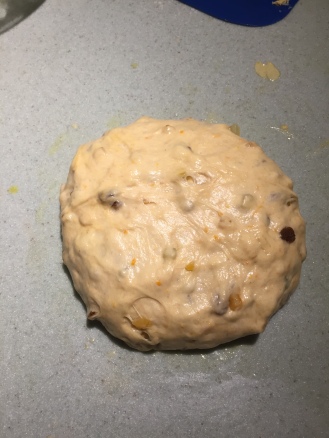 The power came back on 5 hours later and I hoped that by the next morning it would recover.  But it didn’t.  It stayed exactly where it was.  I baked it anyway and even then it barely rose –  a  bitter Christmas Eve disappointment.  I could hear my mother giggling in the living room which reminded me it might not be  wise to try cooling them hanging upside down.

As you can see I now have a dense slightly raised yeasted  fruit cake which will only be good for some sort of baked pudding .  What it certainly is not is a Panettone! 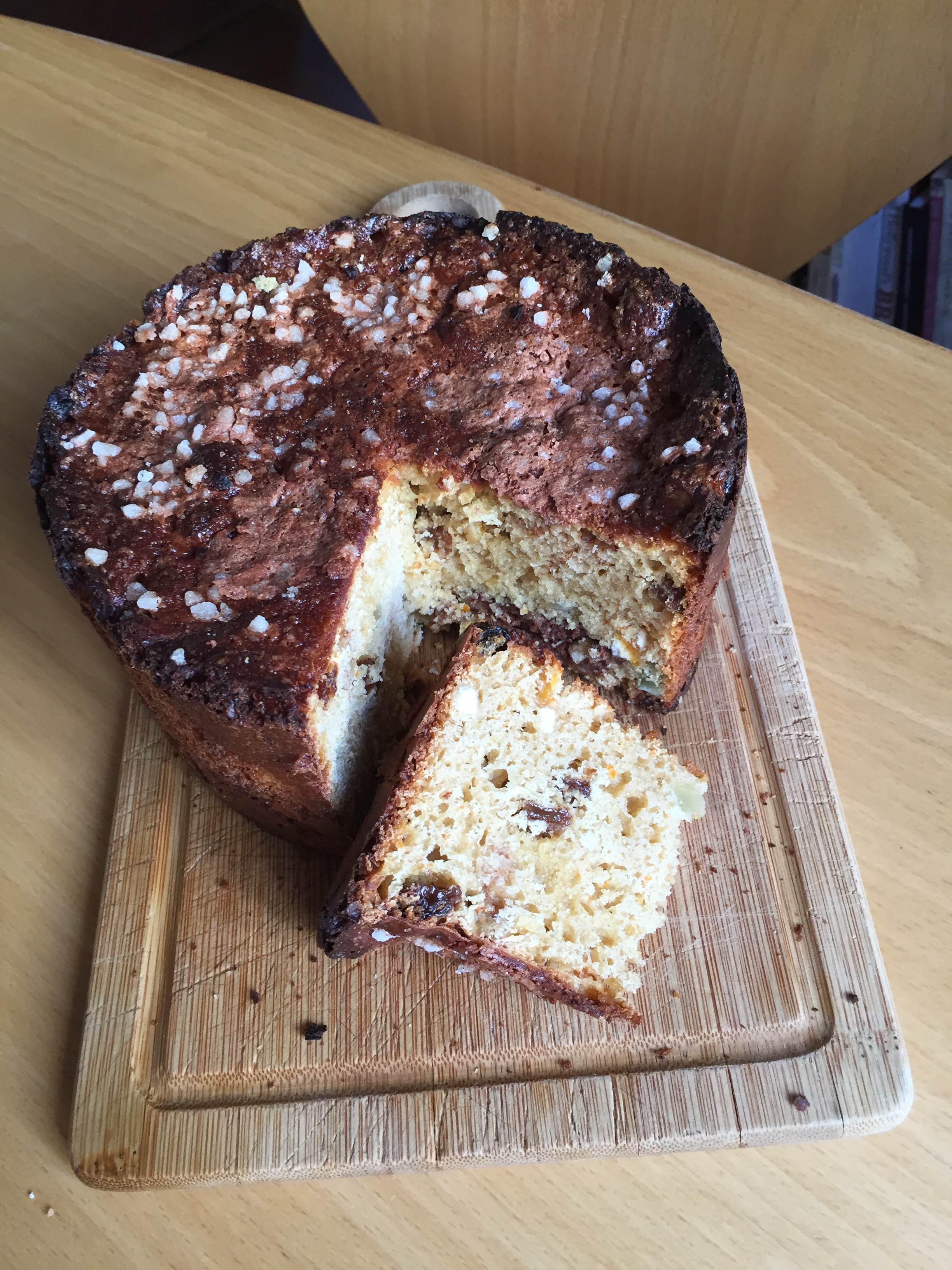 So what lessons to learn? Well power cuts aside it was as if the natural yeast ran out of umph and I think I will be trying a method with a higher instant yeast content next time. You also must never ever be under time pressure when doing this, so next time it will be the first Christmas bake, not the last.   I am also more and more convinced that the dough hook on my Kenwood Chef is not as effective as it should be.  When I use it I always  have to improve the dough afterwards with a bit of hand kneading and maybe this one is no different, though kneading gloop is going to be challenging

Will I try it again?  Well yes, but it will not be until next Christmas which is about the only time of the year I  have 4 -5 days available for a bake.  You will have to wait 340 days to see if I succeed on Attempt 4.