My brother and his french wife are staying along with their 2 lovely girls so the stops had to be pulled out and we decided a quick trip to the cuisine of France was needed.  The hubby made a Beef Daube and Aligot Pototoes, and I decided to try these little Opera Cakes. 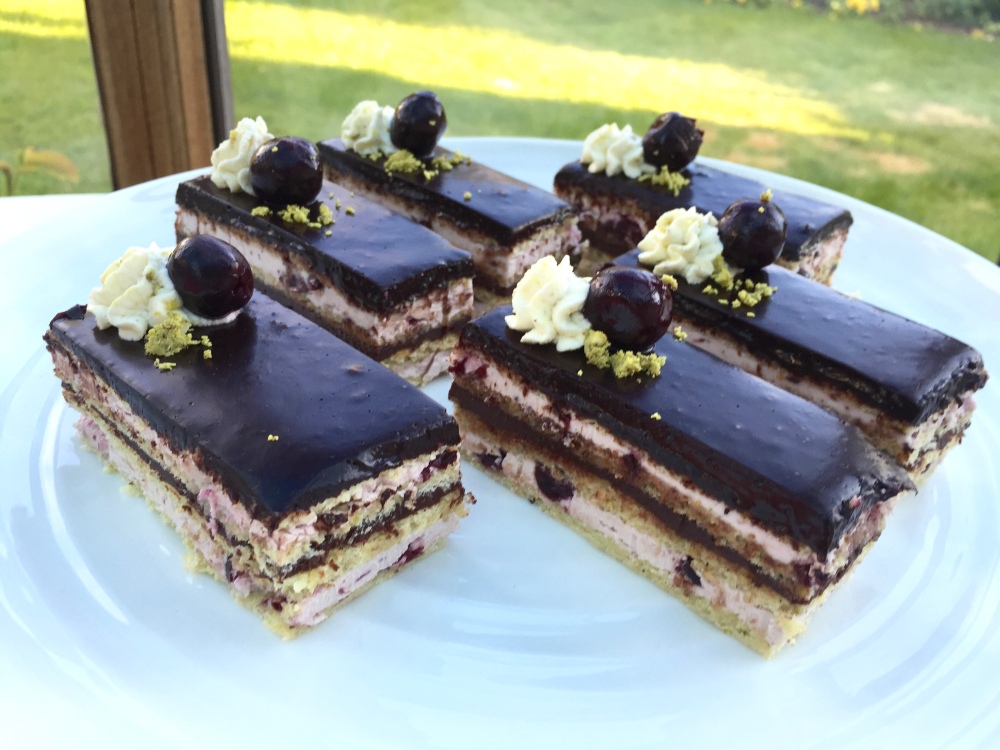 The Opera Cake has become a French classic, but it is only invented in 1955 by pastry chef Cyriaque Pavillon who worked at the legendary Dalloyau shop in Paris. The shop started life supplying complex sweet treats to Versailles (oh how the French love to glory in Louis XIV – for me he sounded like a dictatorial pompous ass ….sorry). The cake of course is a Johhny Halliday come lately to the Dalloyau repertoire. Supposedly Cyriaque’s  wife told him the cake looked like the interior of the Paris Opera House, the Palais Garnier, and the name has now stuck. 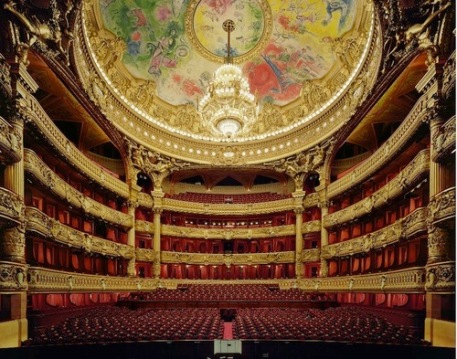 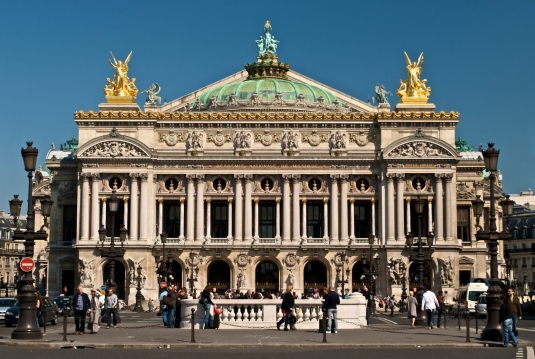 That wasn’t the original plan.  I was determined upon that much maligned German classic, the Black Forest Gateau or Schwarzwaldkirschtorte (which sounds much more exciting). But on Monday the Bake Off Creme de la Creme Book arrived and these little treasures featured in it and given the ingedients were similar to the Black Forest Gateau I couldn’t resist.

If you haven’t been watching Bake off Creme de la Creme , it involves a baking competition between professional teams of Patissieres.  I didn’t warm to it at first thinking  their creations were too complicated for the home baker, but over time I have realised there is tons that you can pick up (Ok – colour gun and a chocolate swan might not be on the cards for a while).  The  programme also has the best but most frightening judge on TV in the form of Cherish Finden.  Woe betide the contestant that delivers a slice that is a mere millimetre different from the last.  She has developed quite a fan base – and with justification.

There are some fabulous recipes in the book, but I chose these little slices from it because the use of Kirsch Cherries and was at least some sort of a nod to my original intention. It really should have been Griotines cherries but these proved very hard to source in the time available, though I am certain would have elevated this cake to another level had I used them.

It is 4 sumptuous layers of pistachio jaconde sponge (a nut based genoise sponge with barely any flour), with kirsch cherry  french buttercream, chocolate ganache and a mirror chocolate glaze on the top.  It is a very rich cake and the Chocolate Glaze is über chocolate flavoured. We served it as pudding with a lovely sweet Muscat which cuts through and complements the richness of this little delight, but I promise you one slice satisfies.  As I said before it is very rich.

Much is made  in the Bake Off Creme de la Creme of precision being the core of the professional Patissiere and that means time is needed.  The recipes are very very precise including weighing  the egg constituents, so any Amercians reading this (you know who you are!) get a set of scales and use those cups to drink from, not measure things.  The quantities also do not leave much room for error, especially with the sponges (more of which later).  There were also a few things I would not agree with so I  have altered the method and technique slightly to allow for this.

The biggest issue was the time.  The book says 1 hr 45 minutes.  Well maybe if you are a professional chef with a battery of sous chefs at your beck and call, but in reality 3-4 hours is more like it.  Unfamiliarity with the recipe, and all that photographing always slows you down, but I reckon it would never be less than 3 hours end to end to get it assembled, and then the cake needs to be chilled, and then sliced and decorated (which takes another 30 minutes if you want to get some precision). 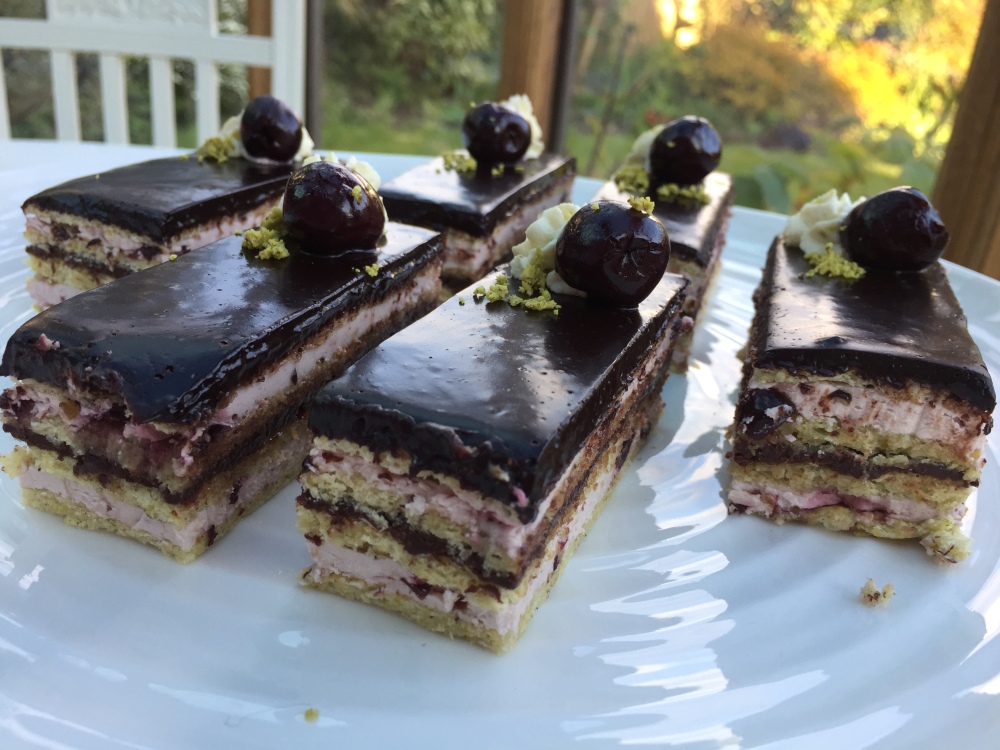 So where were the tight corners?  Well the book suggested making the sponge layers in advance the night before which seemed like a sensible choice as big bro was due to arrive at 12 the next day and I also had a quiche to make (yes I can do savoury as well).

It also recommends making the 4 layers in 2 goes out of 2 big sheets and then cutting them out into the 4 layers.  Well I discovered a number of downsides to this approach.

Foolishly I then innovated.  With the Prince Regent cake the layers are stacked and weighted to force a consistent thickness and I thought to also sort out the ridge problem. That is what I promptly did though maybe I went a little too far. The result was I squashed the life out of the layers with really isn’t what I wanted.

The other half told me to live with it and put it down to experience. That’s not for me I am afraid, so I was awake at 6:30 the next morning and set to all over again, this time increasing the batter mixture by 1/3rd, doing the layers one at a time, and marking out the mould shape on the back of the paper to ensure every piece was big enough.  This has the advantage with the greater amount of batter, of ensuring that every layer is big enough and reduces the ridging effect because the batter spends less time on the paper before being whipped into the oven. Frankly this took just as much time as the recommended method and is more foolproof.

The old squashed sponges have not gone to waste though.  They are now in the freezer and may be making a reappearance soon in a version of the Prince Regent cake I am thinking up along the lines of arrange german butter cream and a mirror glaze.  It may take a few months to make an appearance but watch this space. 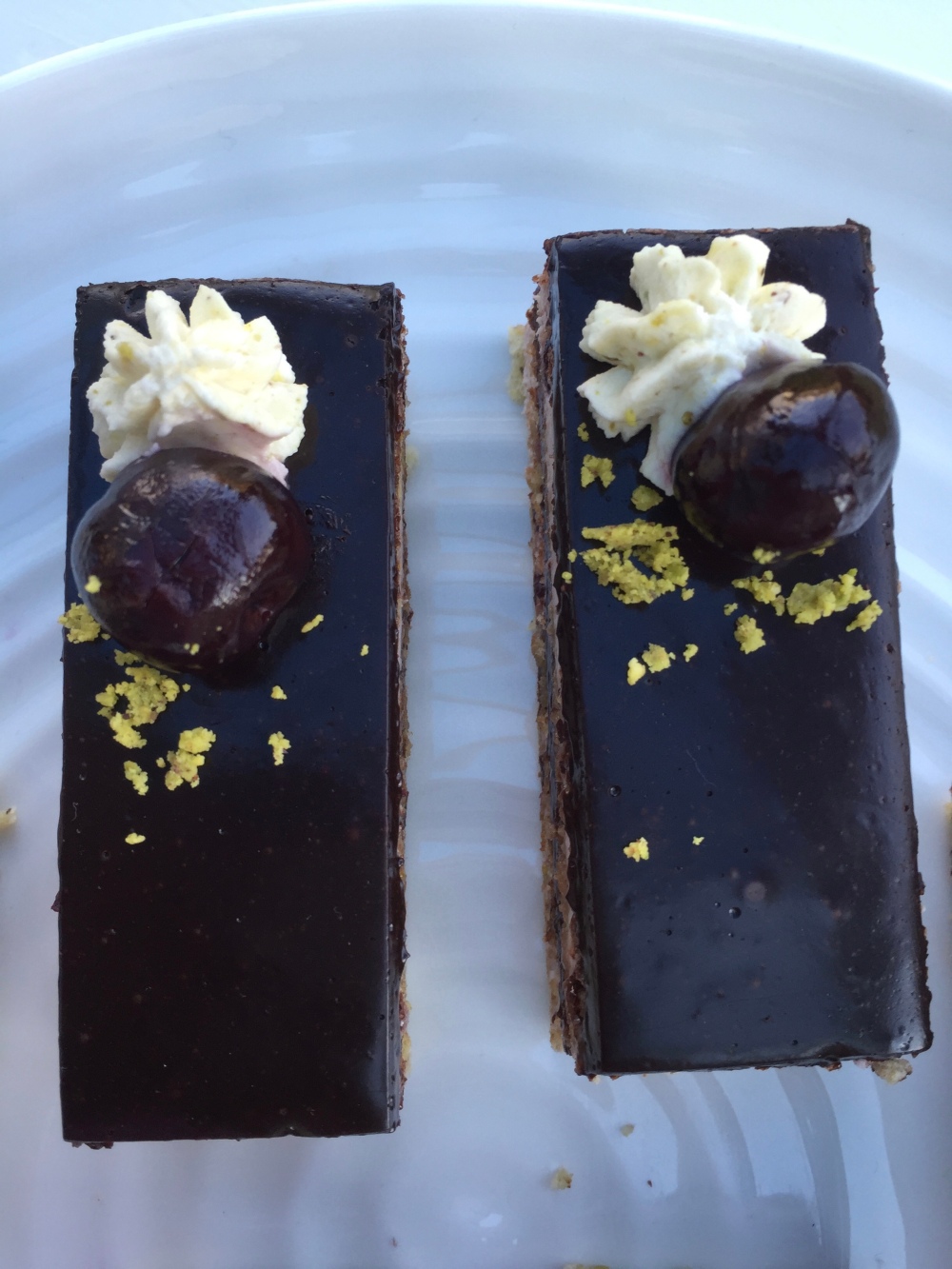 The baking part of this is not that complex.  The jaconde sponge is an easier version of Genoise, French Butter Cream is very like Italian meringue, the Ganache is simple if you keep the temperatures right, as is the mirror glaze.  What makes this tricky is the shere number of processes (all 14 with lots of sub processes within each) and the need to aim for a perfect finish.

You do however need a few pieces of kit in order to do this cake.  Without the mould you cannot build the cake, though you could use the sides of square springform baking tin (though reduce the quantities if you do). An inverse palette knife should be in every baker’s batterie de cuisine – it makes all the spreading in this recipe so much easier.  Lastly without the thermometer you can’t do the French Buttercream or glaze.

So in conclusion was it all worth the huge amount of effort?  Well when served after a delicious dinner, they received much praise.  They are however very very chocolatey and very rich.  If you like that on a cake then this is the one for you.  I am not so sure and the beloved definitely prefers citrus flavours in his puddings so I didn’t get a very fulsome “Oooh” this time.  Next time I would definitely cut back on the Cocoa on the glaze, and definitely make the effort to find Griottines as they have a much stronger flavour.

From bottom to top in order of assembly 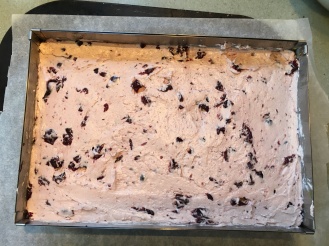 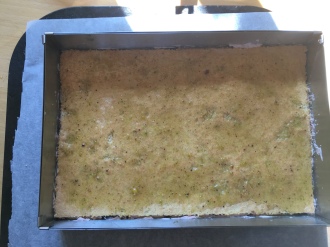 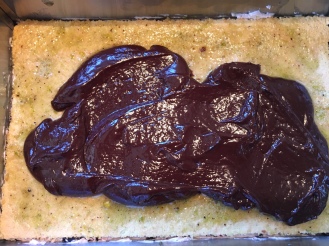 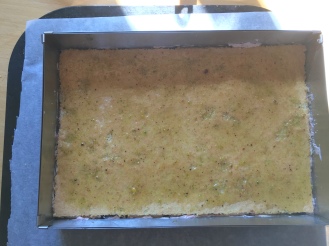 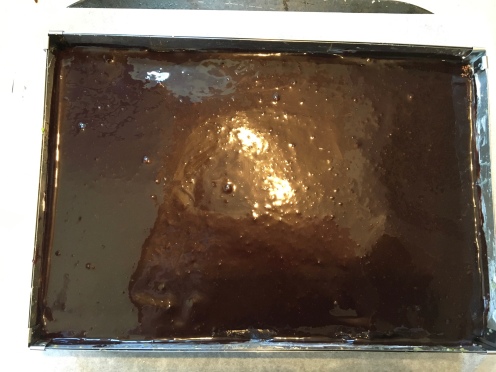 To make the Pistachio Paste 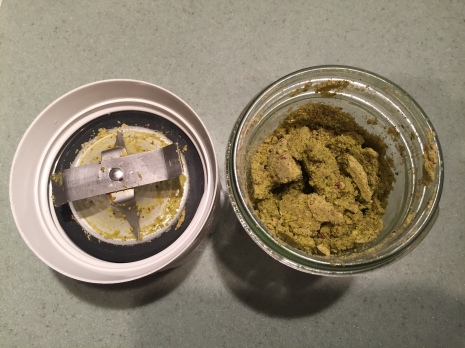 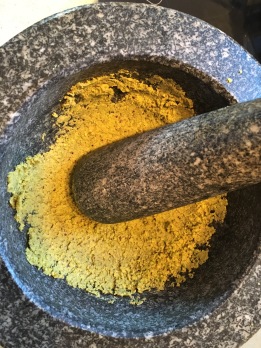 To make the Pistachio Syrup

To make the Jaconde Sponge Layers 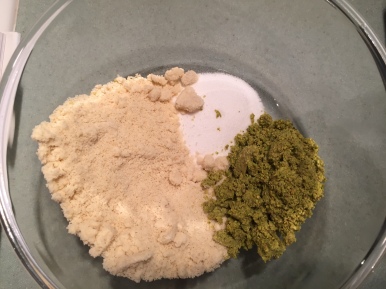 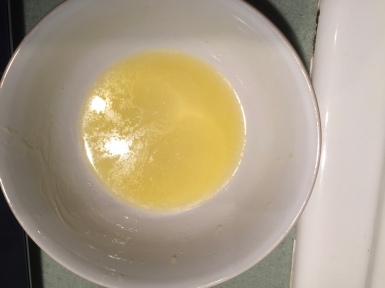 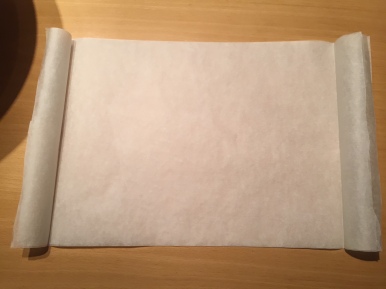 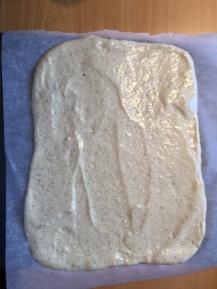 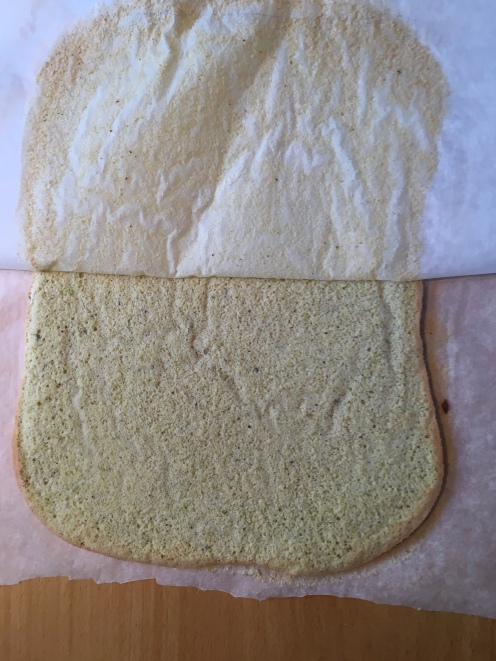 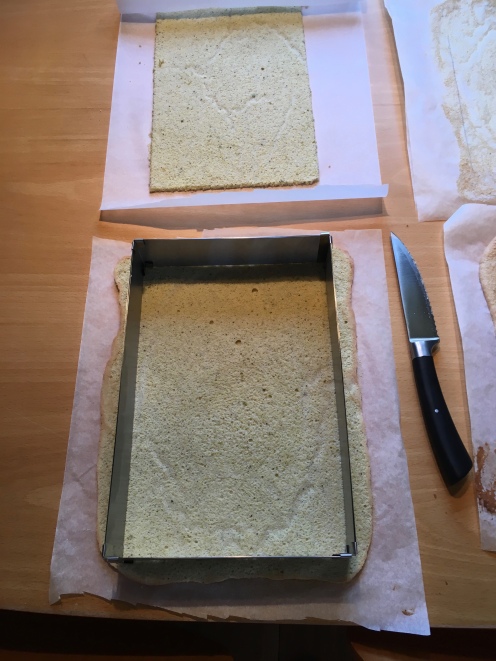 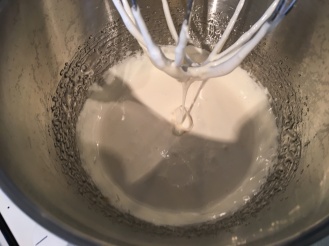 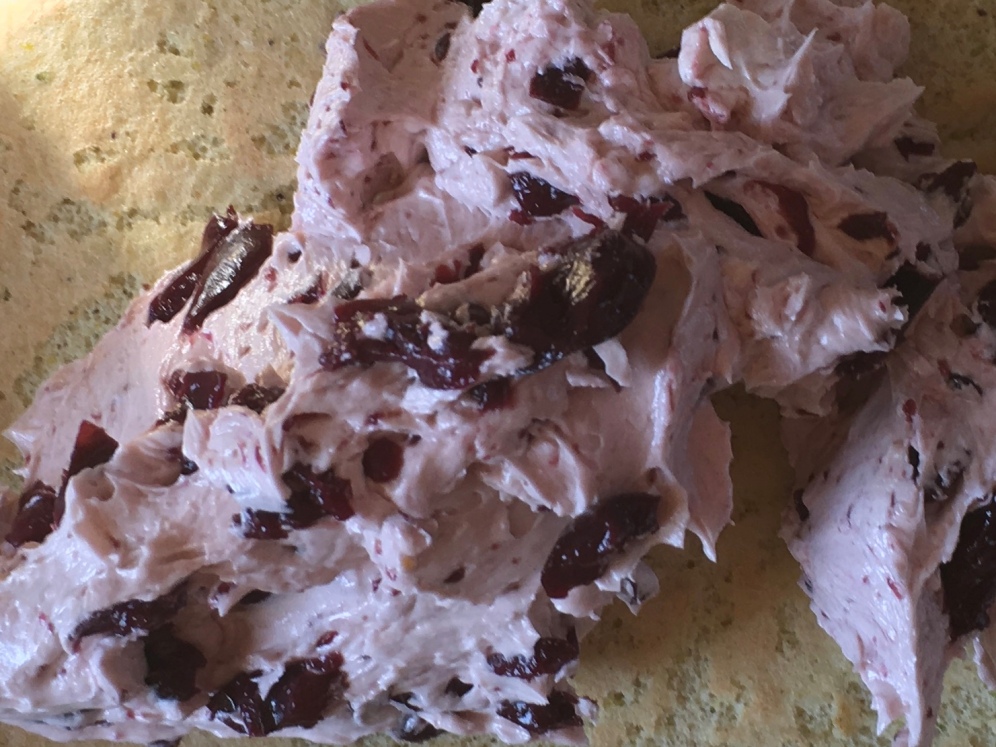 To make the Chocolate Ganache 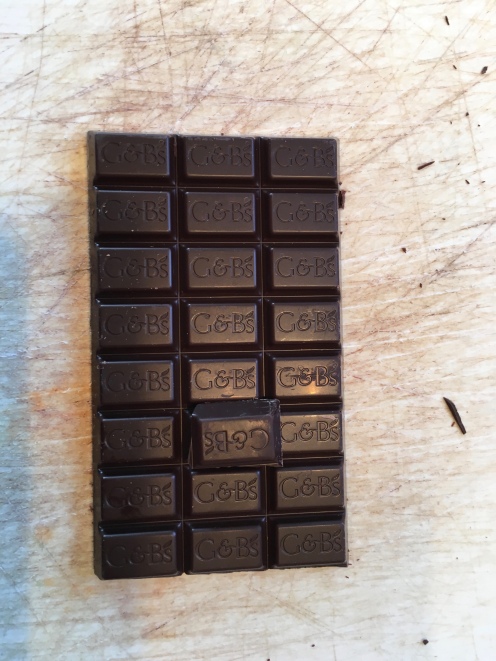 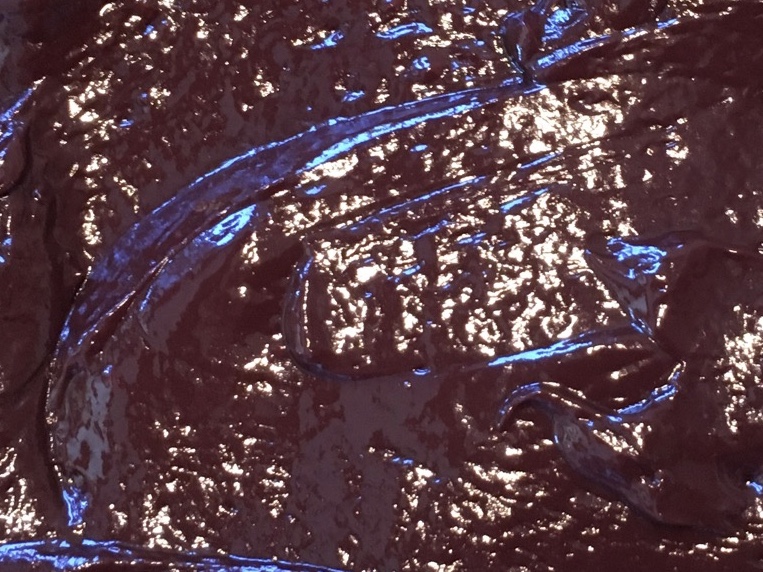 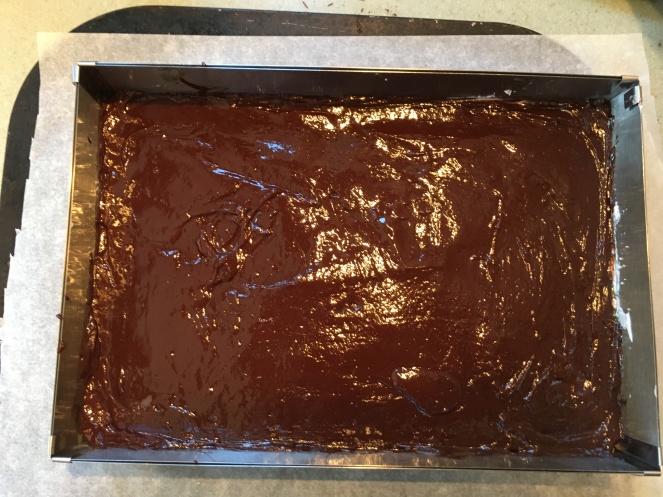 To make the Chocolate Glaze 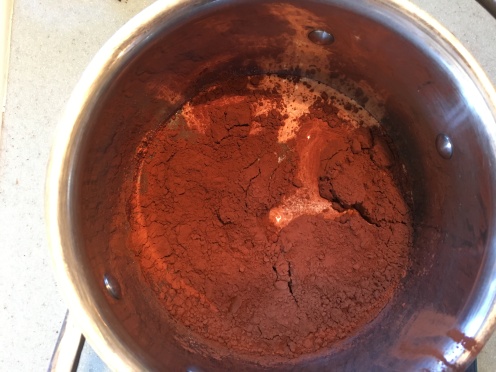 To make the Pistachio Chantilly Cream 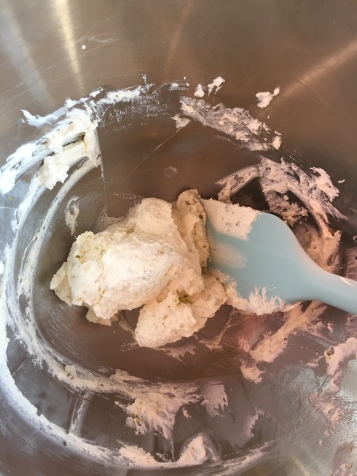 To cut and decorate the slices 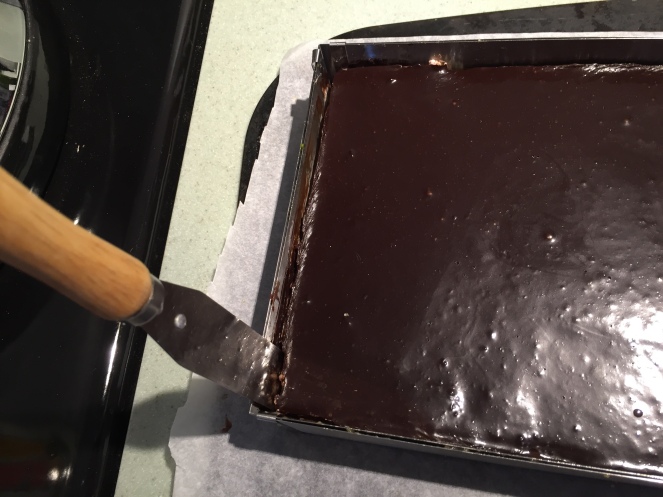 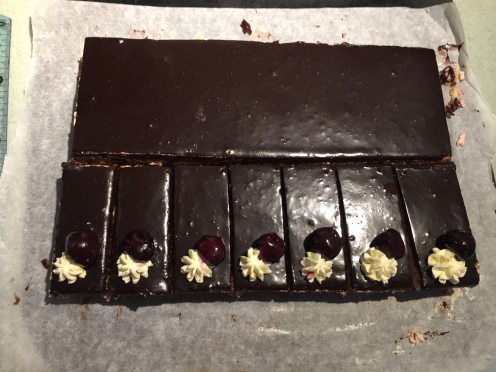 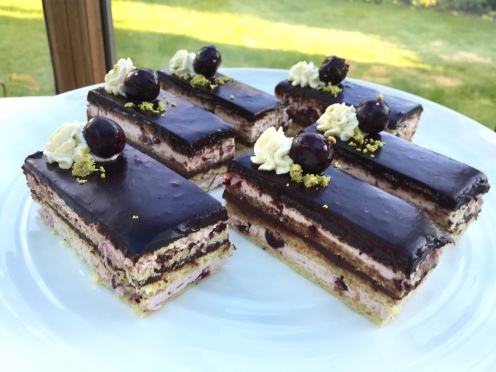