I am always loathe to carp at the Bake Off as I love the programme  but I was surprised that the technical challenge this week was a Fougasse,  a french flatbread cut to look like a leaf.  It was one of the first breads I made, and followers of professional baker Richard Bertinet (he who talks of handling dough like a beautiful woman – all very French!) will know, the Fougasse is the first bread he gets his Beginners Class to do.  It is an easy bread to make and needs very little dough handling skills, but it is also absolutely delicious, especially the sourdough variety.

If  you had never come across a fougasse, I suspect you would think this was some exotic french delicacy that required extra special skills. I suspect because of the pressure the contestants seemed to over think the whole thing and were probably a bit perplexed by its simplicity, thinking it couldn’t possibly be that straightforward.  The telling moment was when one contestant said “Oh, it’s just basic white bread dough”.  Yes,  I screamed at the TV,  it is!  I also suspect the mega sized version required by Mr Hollywood would probably send a French baking purist into apoplexy as these things are supposed to be the size of a big dinner plate not an oven baking tray. However Mr Hollywood can be forgiven much not only because he  is  very pleasant to look  at, but also because he is a very knowledgeable and  talented baker.  Added to that I am grateful to the programme for reminding me I hadn’t made a Fougasse for a while and re-introducing me to its delights.

The opportunity to make one appeared soon after the programme. My mother is visiting this weekend so breakfast bread was required and I decided to make a bit of extra dough and use some of it for a small Fougasse for supper. This is how I recommend anyone to do one (unless they are doing a whole batch for a party).  You can make it plain, with herbs scattered on the top, or with any variety of items. Olives, lardons or onions are the classic ones. These pictures are not my own but they give you an idea of the varieties that Fougasses come in.

If you are making a loaf, hack off a fist full of dough from your main batch after the first prove, let it spread out on the work surface and then stretch it out flat holding it down at one end and pulling at the other.  You are trying to achieve a basic triangular shape about half a centimetre thick. Then put it on a floured baking tray put a cut down the middle and then cuts diagonally to on each  and stretch them out. 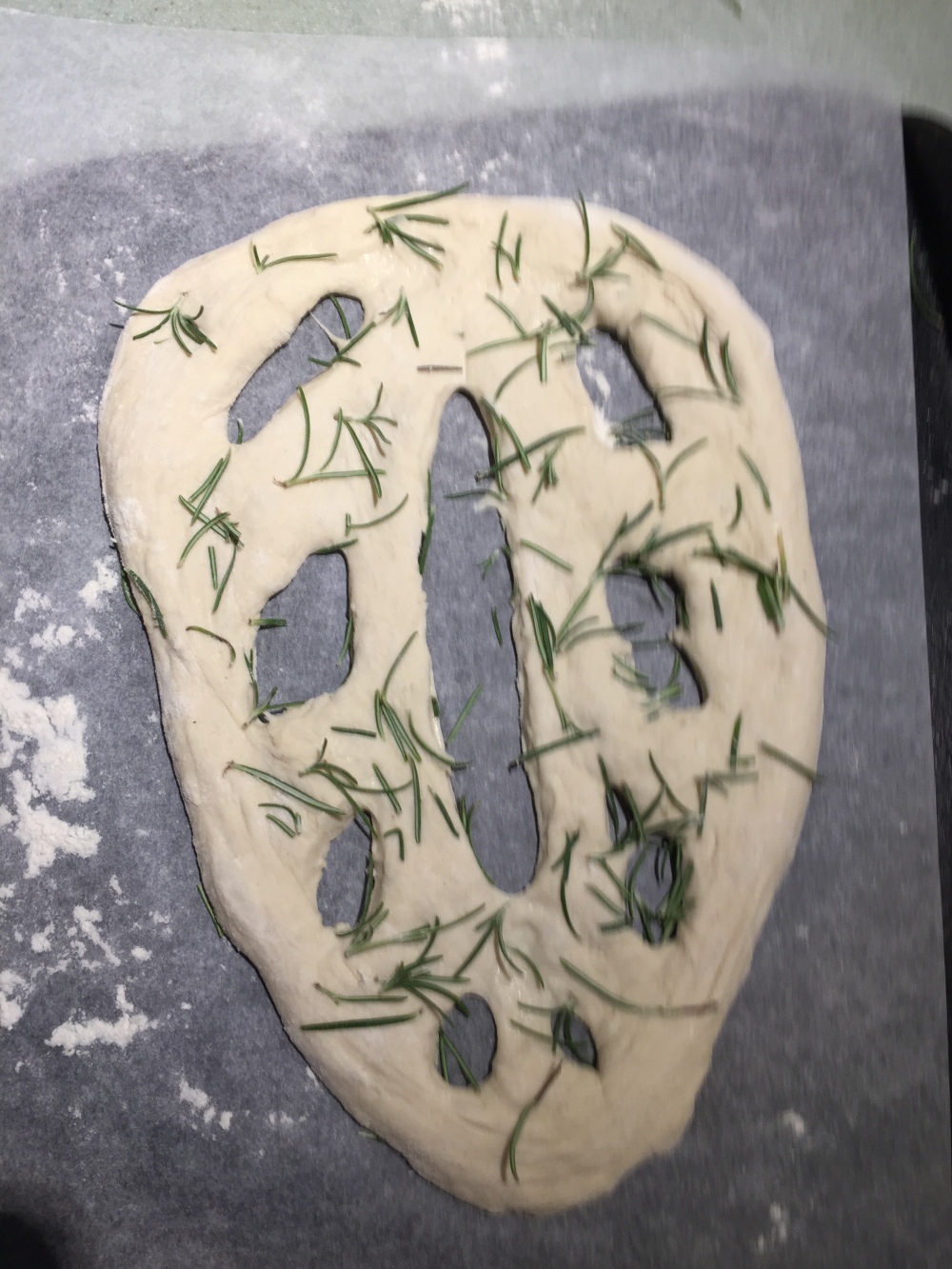 Be bold with the cuts. If they are too small,  they close up again.  Press in some rosemary or thyme on the top and allow to rise.  If this is a normally yeasted dough this takes about 20 minutes.  A sourdough version takes a few hours.