The plan this weekend was to do that 70’s classic, a Blackforest Gateau, though I prefer the name Schwarzwaldtorte  as it is sounds much more exotic.  It is a much maligned piece of deliciousness if done properly but it needs the right ingredients, particularly the special sour cherries which are not easily available in the UK. Unfortunately I couldn’t find them in any Uk websites, so thanks to amazon.de they are now on their way from Germany without the benefit of my Amazon Prime membership, so for this weekend I had to change tack a little. 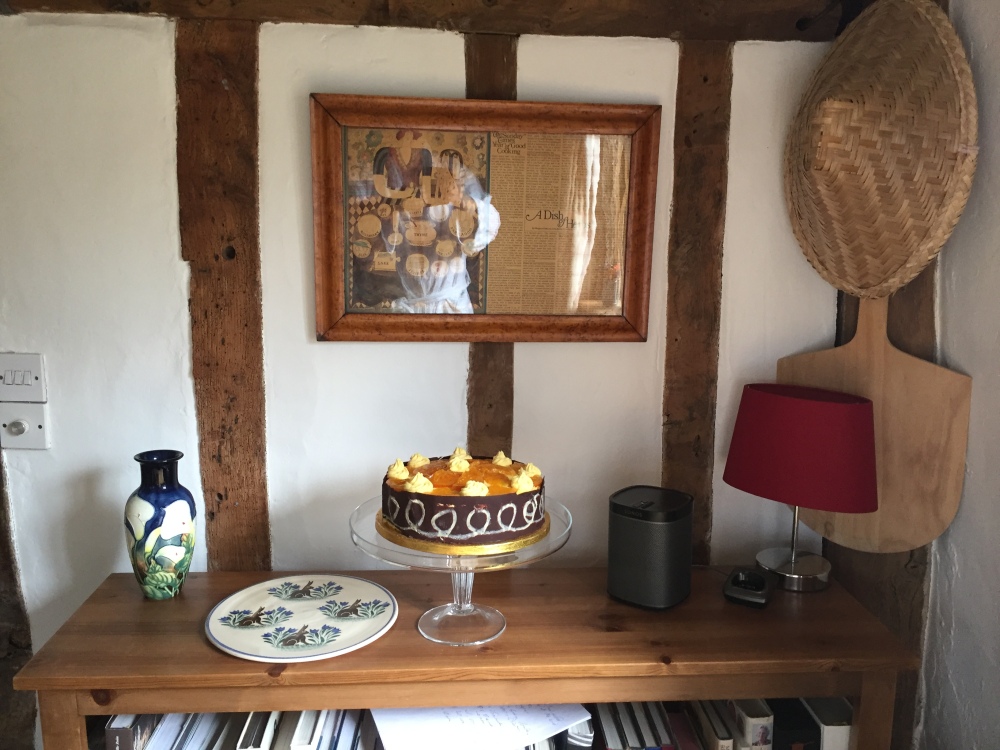 I am determined to push myself a little since the rather quiet baking autumn (damn that work thing), and there are a few things I have been meaning to do for a while.  Chocolate tempering has long  been on the list and I have admired chocolate collars on cakes forever.  Added to that I have never candied any citrus fruit and with 3 oranges sitting in the fruit bowl, I decided to try something which combined all 3. 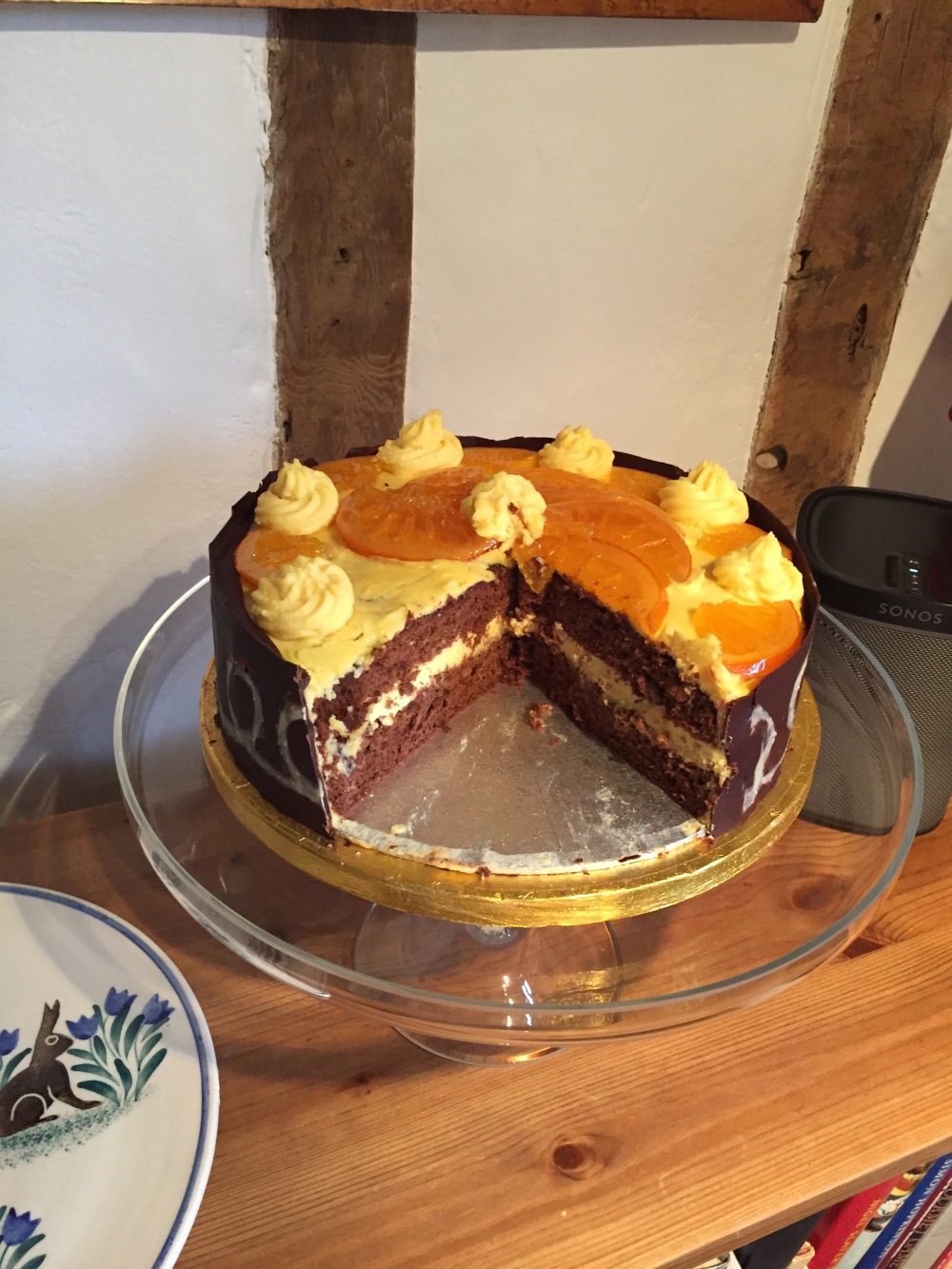 The result was this delicious though less than perfectly executed Chocolate Orange Cake, partly inspired by another recipe but with the chocolate content reduced (I am not keen on full chocolate cakes), and the orange content increased.  It is a chocolate genoise sponge, sandwiching orange German buttercream, topped off with candied oranges, and wrapped in a tempered chocolate collar.  Time consuming?  Yep!  Room for improvement? Definitely – especially the design on the collar!  Lots of lessons learnt? Certainly!  Delicious?  Absolutely! 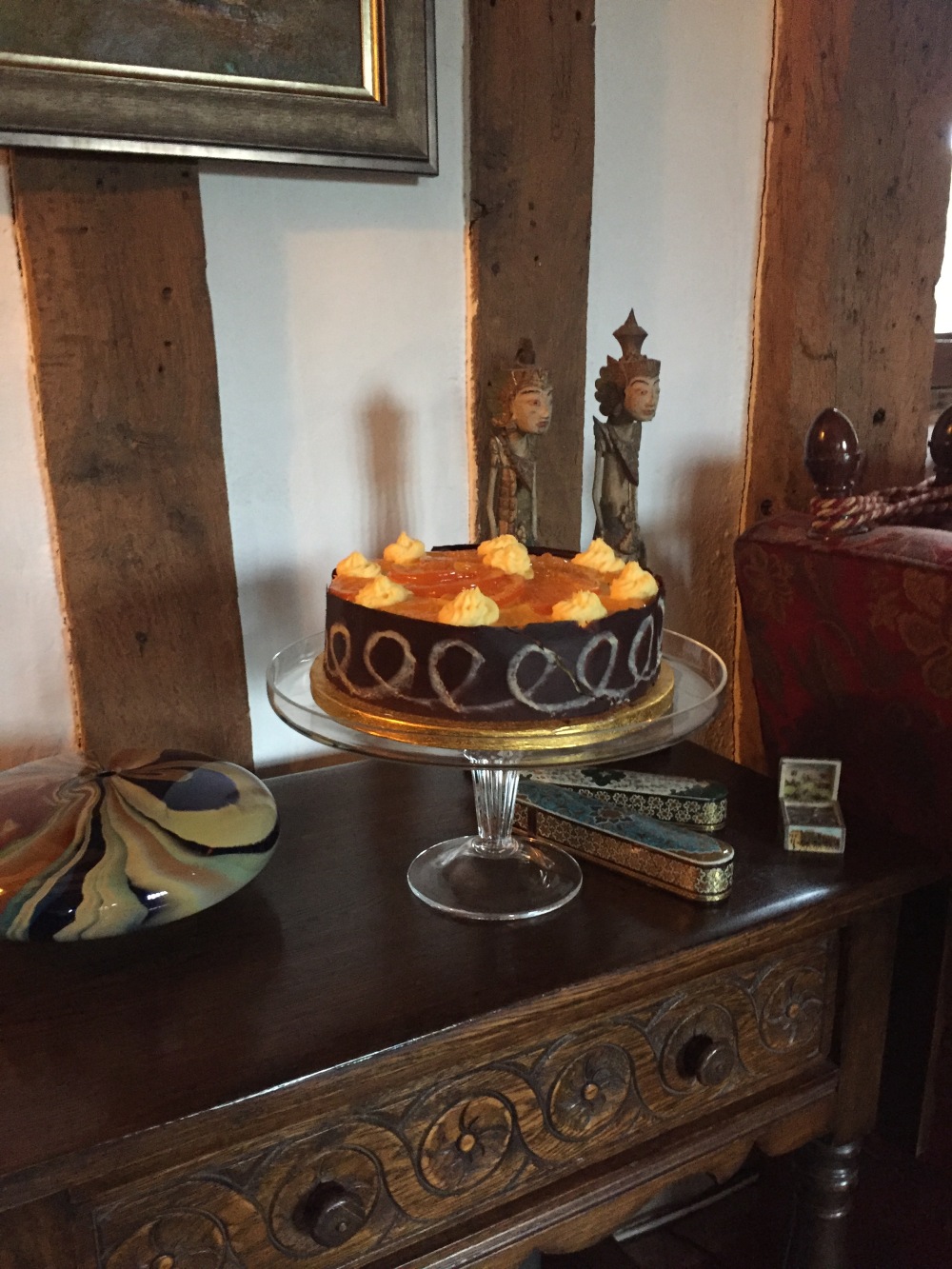 So let’s go though the elements.

The chocolate genoise sponge first.  I love genoise sponge.  It is so fluffy and light and far less complex to make then everyone thinks.  The key is the level  to which you must whisk the eggs and sugar together until they are thick and glossy and flow off the whisk in thick ribbons.  Other than cutting it evenly, this was the one element of this bake I was thoroughly comfortable with.  I had however forgotten it tends to be  a little dry and would have benefited from syrup being soaked into it, which annoyingly  I had a wonderful and unused source from the candied oranges. 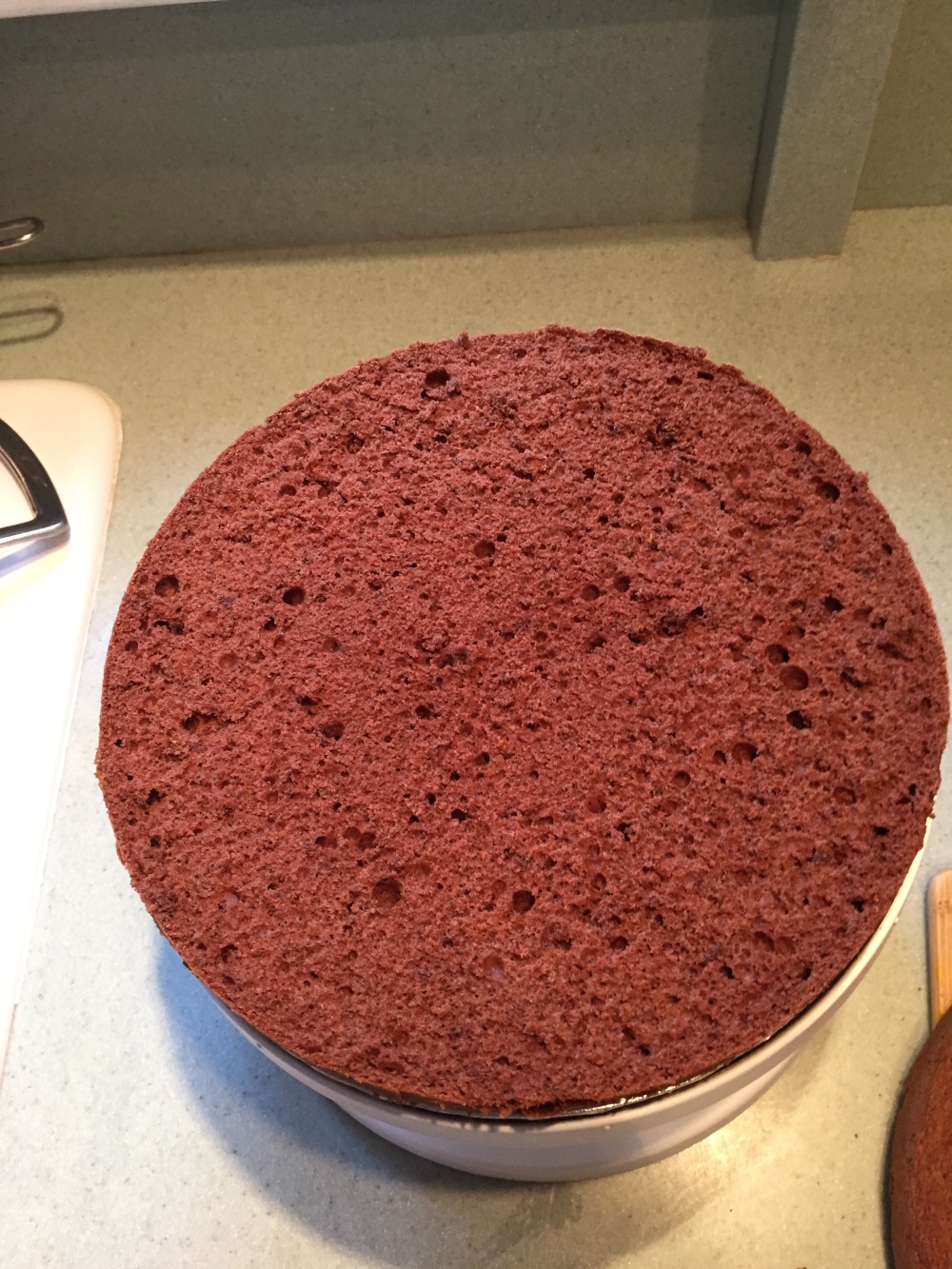 The orange German buttercream next. German buttercream is much lighter than the anglo-saxon variety and similar to creme mousseline but with a higher butter content and a firmer set.  The basic technique is to make a creme patissiere and then whisk in vast amounts of butter to make a light fluffy cream.  The fruit varieties use fruit juice instead of milk for the creme patissiere which  I always thought sounded tasty.  I have tried this once before but it came out particularly flavourless which I knew could not be right, so I have been determined to try it again.  This time round I used fresh orange juice and added in orange extract.  It came out much much better.  So whilst this element was not quite a first, it is the first time I have made it successfully. 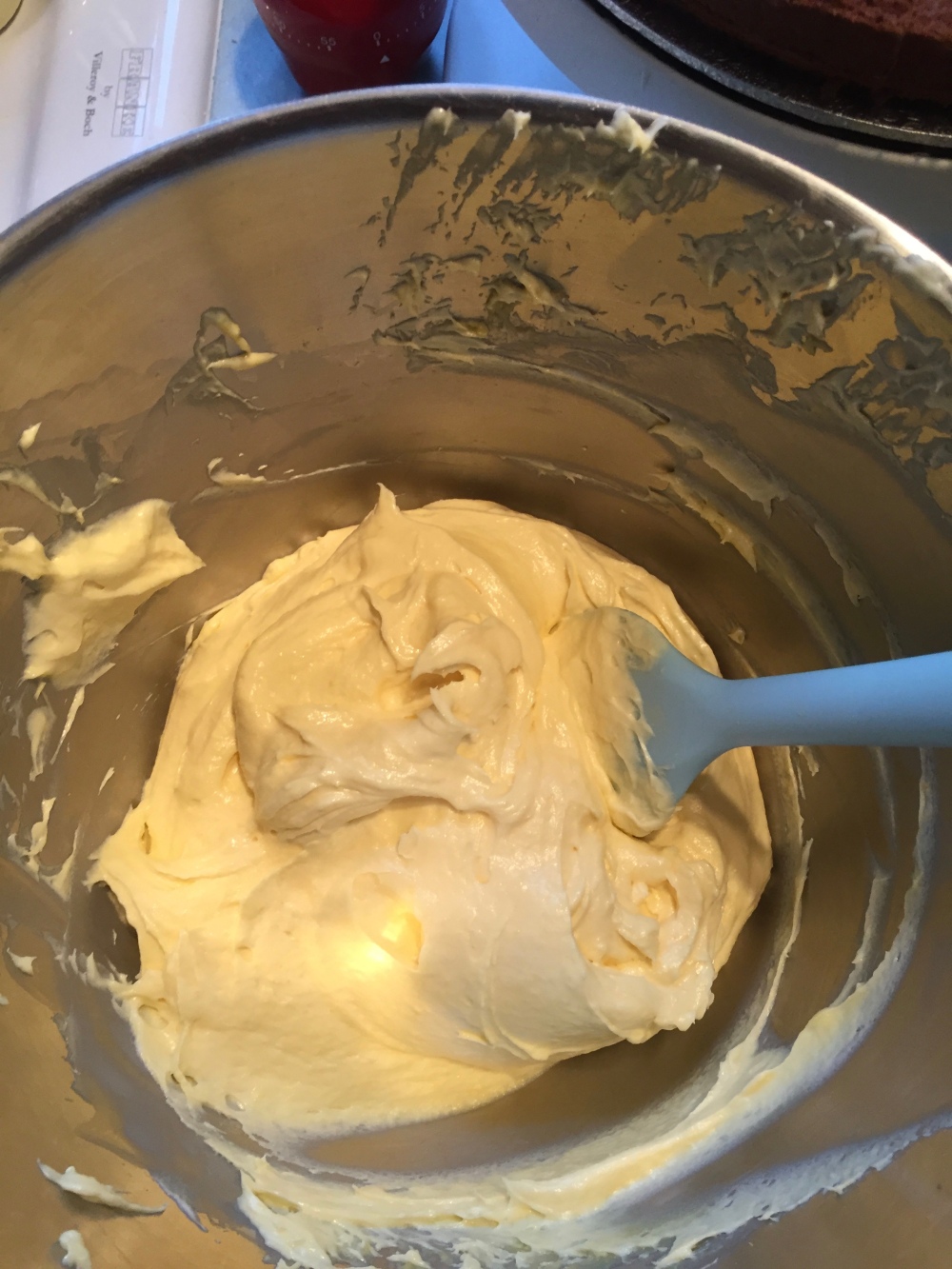 Next the candied orange peel.  Now I have no idea why I have dodged candied fruit for so long.  I am throughly comfortable with caramel and sugar syrups so the dodging must be put down to laziness. Easy ?  Well yes really, but certainly time consuming.  You need to briefly blanch the fruit in boiling water, and then immediately submerge them in ice cold water so they don’t over cook , and then you cook them in a thin sugar syrup on a low temperature for an hour, flipping them over every 15 minutes.  If you want them crispy you then have to throw in granulated sugar and allow to air dry. 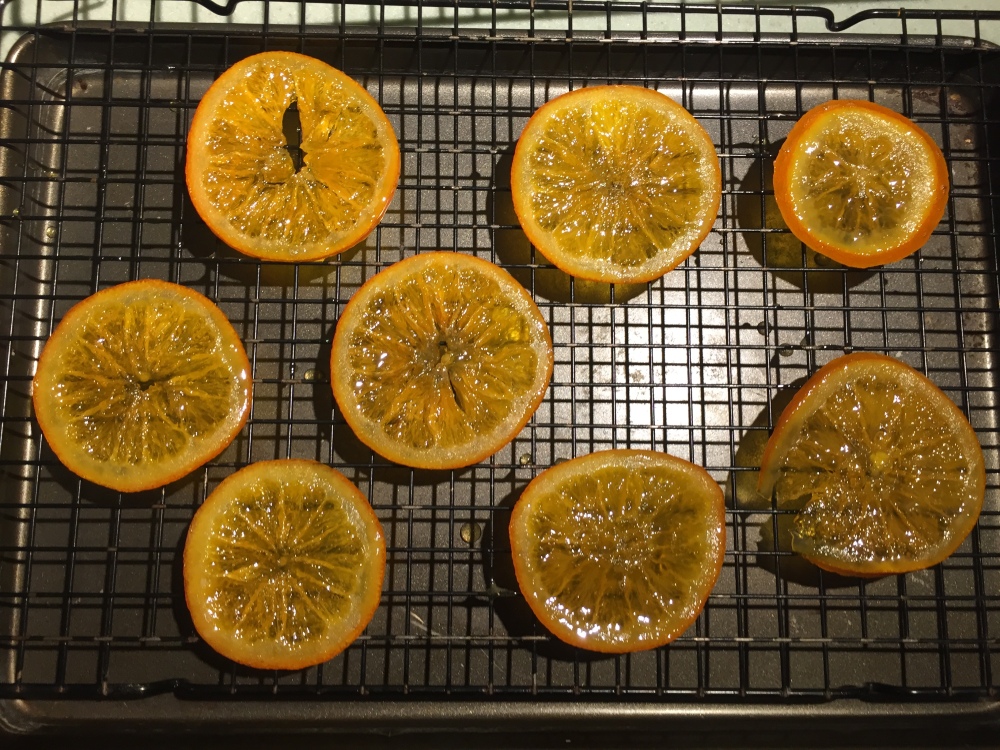 And finally the chocolate.  Now the beloved is very tolerant of my baking which always seems to start tidily and rapidly descends into chaos, especially when there are many elements to the bake.  All I know after this is that if I do a lot of chocolate work in future he is going to go nuts.  The chocolate seems to have gone everywhere, especially when I made the collar.

Tempering first.  This is all about getting the chocolate to have even crystals in it so it doesn’t look streaky when it dries and has a pleasing snap when it sets.  I have read and read about tempering techniques but currently I have no plans to buy a tempering machine at a cool £80, nor a large marble slab, so the only method available to most of us is the “seeding” technique and a decent food thermometer. 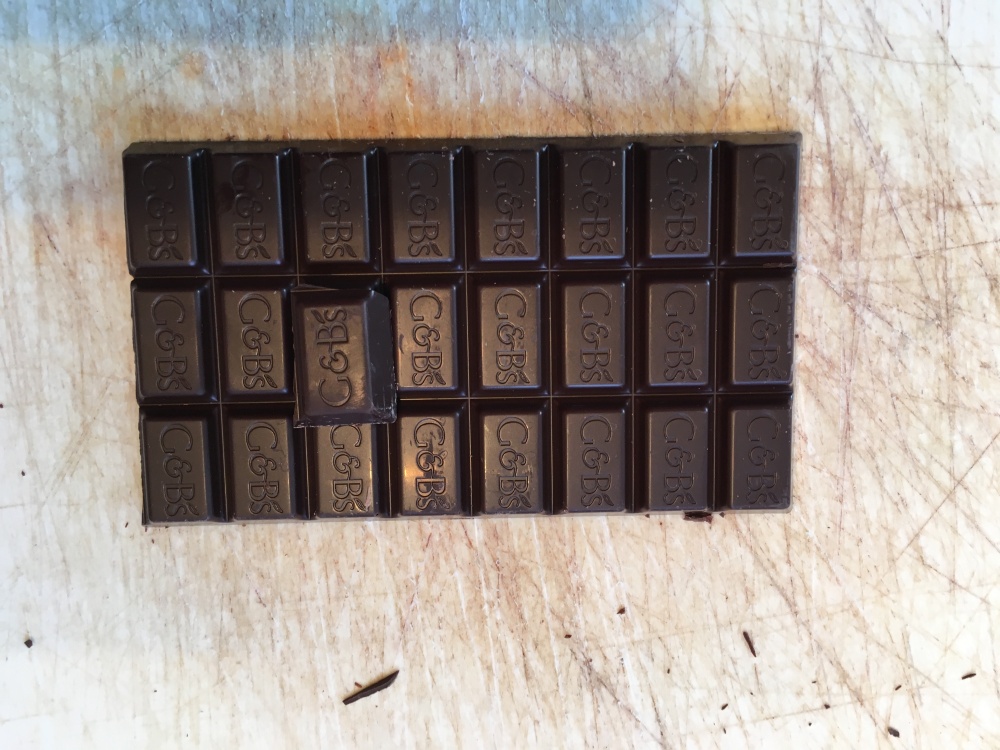 The seeding technique involves melting your chocolate until it reaches 50C (and no more!), then throwing  in some other finely cut chocolate (the “seeds”) and stir until the temperature drops before working with it.  Other than the precision this is not horrendously complex, but what none of the books said was just how long it took to get back down to 28C from 50C, now when you are using 2 chocolates on the collar show on earth you do that and maintain both at 31C. Allow at least 10 minutes for the cooling process and that is 10-15  minutes constantly stirring so you can be doing nothing else, and once it is ready you have to work fast as ideally you need to keep the chocolate at its working temperature off 31C.  That means everything else has to be ready! 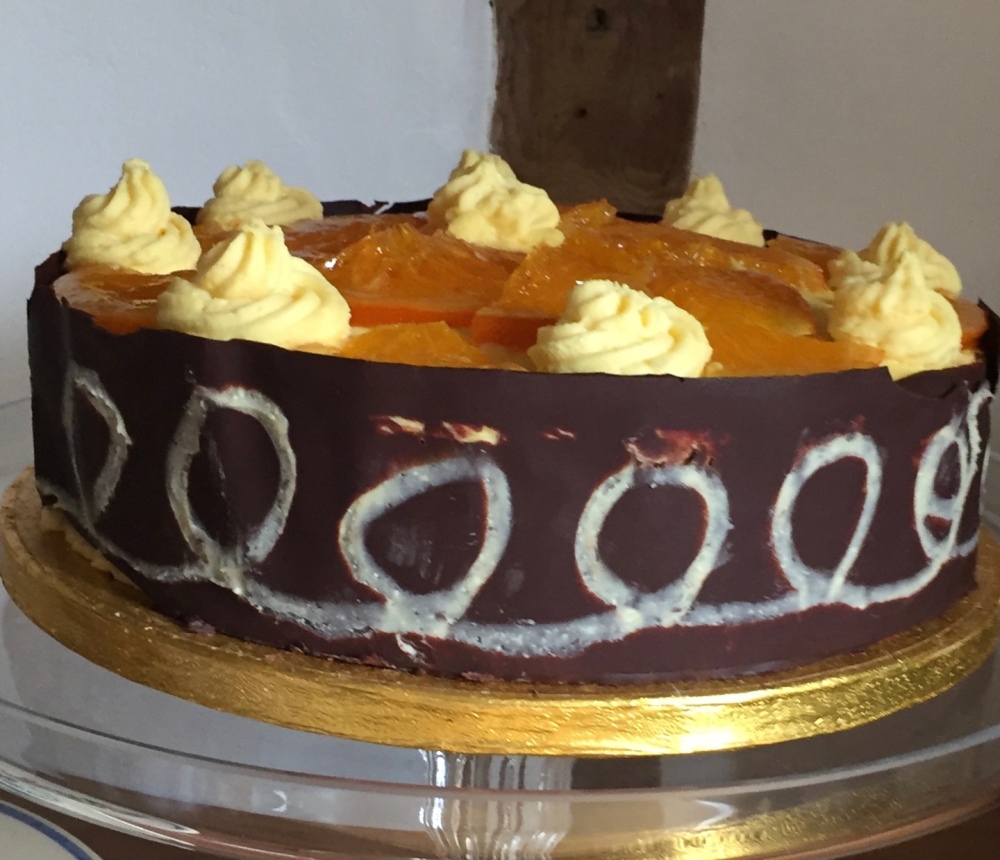 And finally that collar…… hmm .   It does not look great. All I can do is beg forbearance as a chocolate collar novice.   The idea was for an an informal random pattern in white but my inner Jackson Pollock failed me – next time I am going full splatter or more formal with a stencil or just plain – certainly not this!.  But I have learnt a few things.  You make the collar by spreading the chocolate on a strip of either baking parchment or acetate, and then wrapping it around the cake.  My strips of acetate were too tall for the cake so I went for the parchment technique.  Never ever again!  The parchment gets floppy under the weight of the melted chocolate and in my case one bit folded under itself (someone is going to enjoy a taste of parchment in their slice), and another bit flopped over the top of the cake.  So next time it is  acetate all the way and if I am doing a design it will be much much neater!

Will I do this again?  It is a tasty cake, but maybe not all elements in one cake as it was a lot of work.  The chocolate collar needs practice so it may make an appearance next week when I do that Schwarzwaldtorte, as long as that delivery from Germany arrives in time! 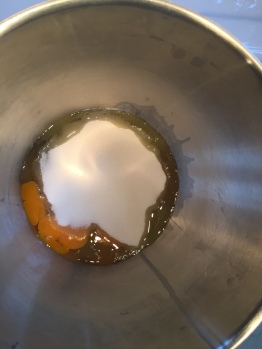 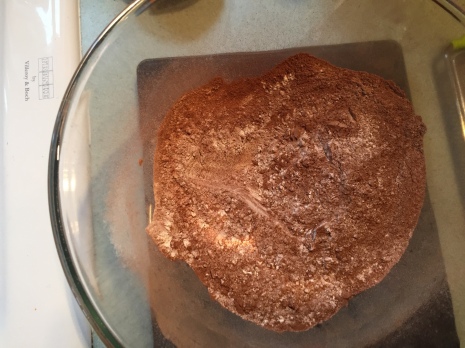 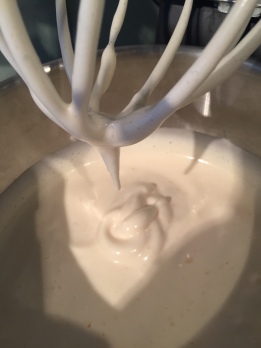 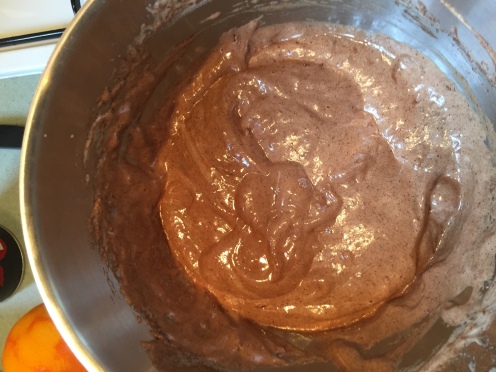 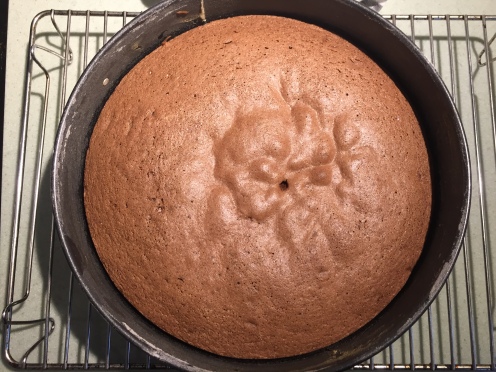 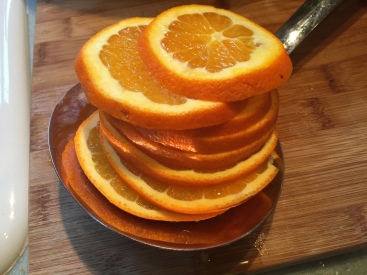 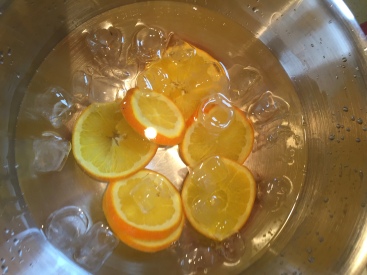 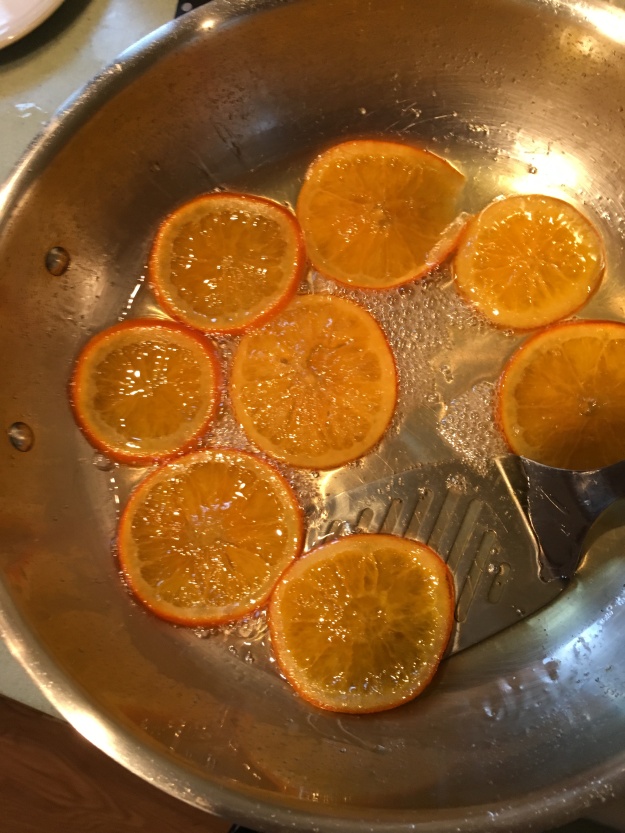 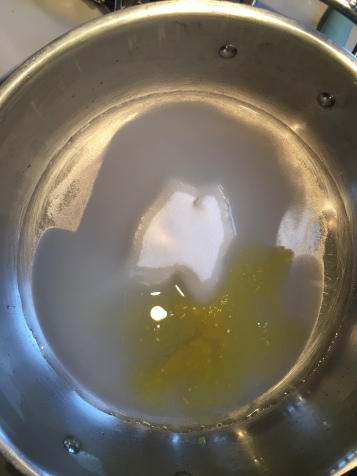 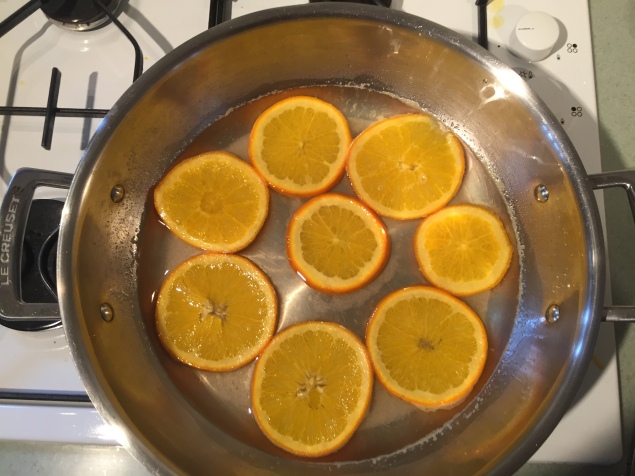 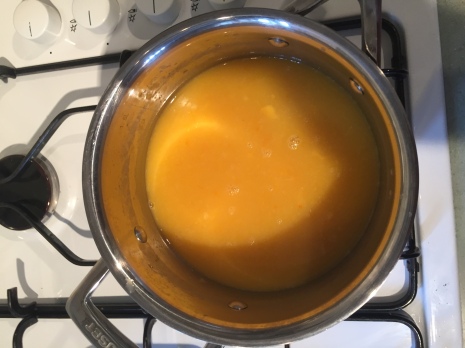 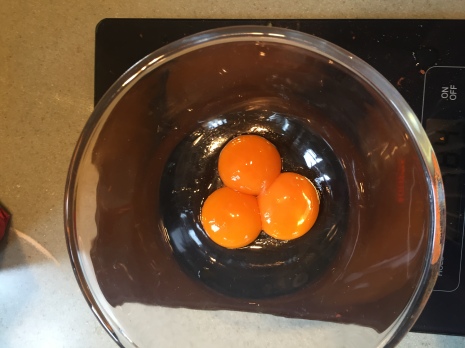 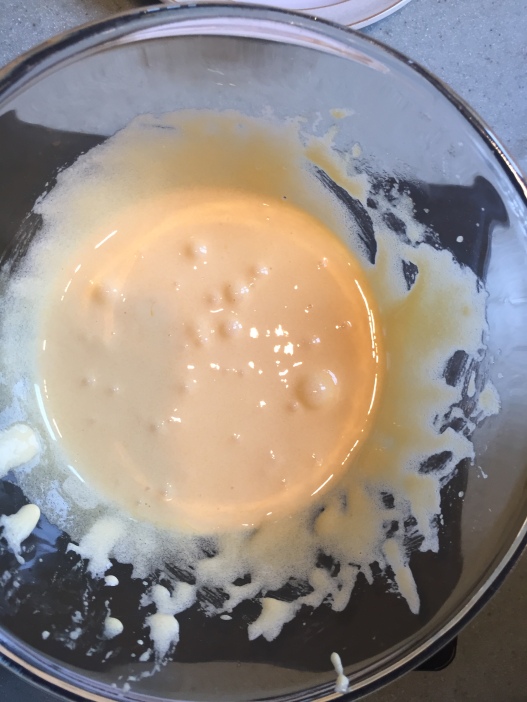 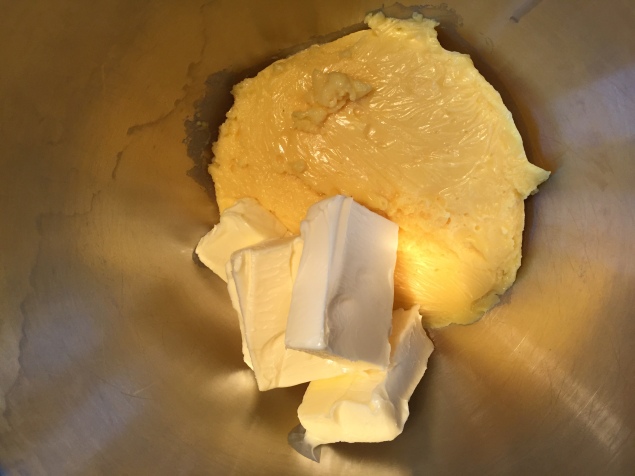 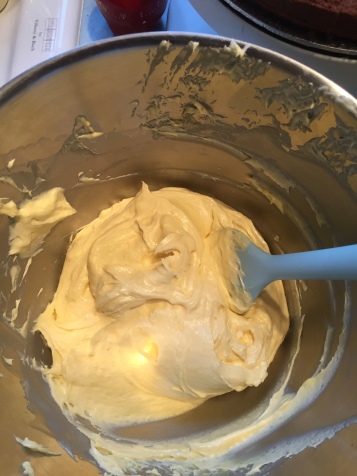 Fill and cover the cake 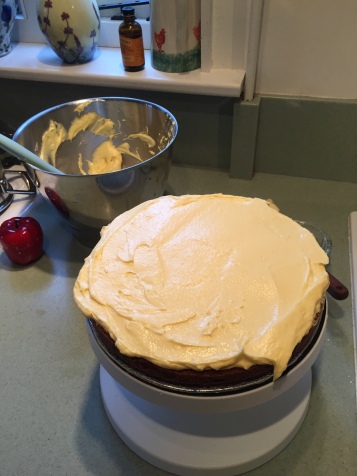 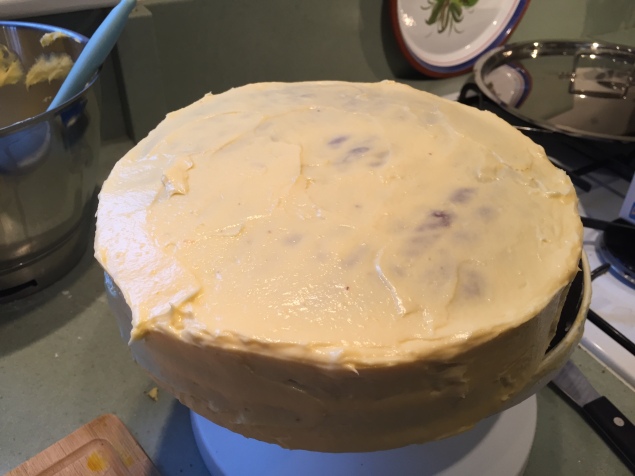